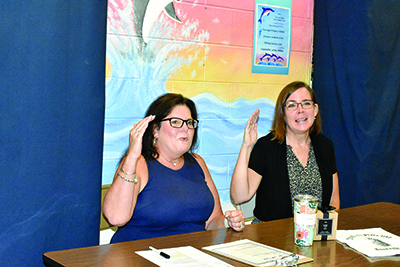 The faculty hosted a surprise breakfast, then after appearing on the school’s morning announcements with FPS principal Gina Byrd, Gornowich was greeted by the entire student body, lining the school’s hallways and cheering her on as she passed by while the “Star Spangled Banner” played over the intercom.

The children had been encouraged in advance to wear red, white and blue as part of the surprise, and many waved flags, too, in honor or Gornowich’s service.

The Farragut resident, who has been in the Navy for 26 years — 10 years active duty and the last 16 as a reservist — told the students during the announcements she “had so much fun” while she was gone, adding, “Even though I spent the entire year in the desert.

“But I met lots of great people and I am so thankful to be home.”

She returned to what will be her third year at the school in her current role, although she had previously served as a substitute teacher there for several years.

“They really surprised me — I had no idea they were doing any of this,” Gornowich said after the morning’s events. “I was so excited to see all these little faces again.

I just love being here, and I love how different it is from my Navy job,” she added. “They have all been so supportive of me.

“This is just a very sweet school.”

They also sent “hundreds of pounds of care packages at Christmas,” she said, which were distributed among the 300-plus servicemen and servicewomen stationed at her site, where she served as director of human resources for the ongoing “Operation Inherent Resolve.”

“It was nice to be able to bring a little cheer to everyone there,” she said.

The community not only reached out to Gornowich during her deployment but also to her family, which includes husband, Dennis Gornowich, and 13-year-old twins, Aron and Emily, who attend Farragut Middle School.

“They all did quite a bit for my family while I was gone,” she said.

Gornowich served in Kuwait from July 2018 to July 2019, where she oversaw a staff of 19 who helped her manage awards, placement and travel for more than 18,000 troops from 29 nations.

It was the second time Gornowich had been deployed overseas and away from her family.

“The first time I was sent to Afghanistan when the twins were just 18-months old,” she recalled. “That was really

hard. This time, because technology has advanced a lot since 2007, I was able to do a lot of video chats, and it was a little easier.”

Gornowich said she hopes to remain in the Reserves at least four more years – maybe longer.

“I’d like to make it 30 years,” she said, noting she has more than succeeded in accomplishing her long-held dreams.

fortunate in that I have been able to do what I love, and do both.”