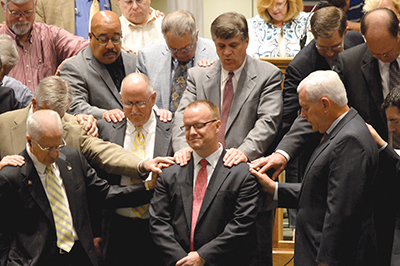 Christ Covenant Church P.C.A. members surround and lay hands on the Rev. Seth Hammond, as he is installed as the church’s new senior pastor by founding pastor, the Rev. Jim Barnes (directly behind Barnes), during a church service in May 2017.
Reflection, fellowship and homecoming marked Visions Sunday celebration for Christ Covenant Church P.C.A., when its members celebrated its 25th anniversary Sunday, Aug. 18, with a service and luncheon at the church, 12915 Kingston Pike.

“It was an amazing experience, and it was a milestone event for sure,” said current lead pastor, the Rev. Seth Hammond.

“It was kind of like a homecoming,” said Teresa Pratt, Christ Covenant’s director of media and design.

One of those who returned was founding pastor, the Rev. Jim Barnes, who in August 1994 was called by Cedar Springs Presbyterian Church to be a planter for Christ Covenant.

“There are no words to say how much I miss this church,” Barnes said during the service Aug. 18. “I’m sure I will never find another church like this.”

Now retired and living in the Nashville area, he remembered being called to start a new church in Farragut with a focus on prayer, fellowship and discipleship.

“I’ve thought about this church so often, about how blessed it is to feel (the spirit and truth) and I saw it this morning,” Barnes said. “I haven’t felt this in a long time.

Hammond, who came to Christ Covenant in January 2013 as the Young Adult Ministries assistant pastor, was called to be lead pastor in May 2017.

“I would say the top three things about this church are emphasis on prayer, world missions and discipleship,” he said.

“It started with prayer,” Hammond added. ”It’s really picked up in prayer in the last seven years with revival.

He also has seen growth in world missions.

“We started with just a handful of missionaries from day one that we supported financially and through prayer around the world,” Hammond said. “Now, we are up to 25 missionary families we support.

Discipleship — training members, in the essentials of the Christian faith, to be a follower of Christ and take ownership of their faith — also has grown, he noted.

“Jim Barnes, founding pastor, started this church based on equipping our people to take ownership of their faith and to impact their community by investing their lives,” he said.

Now the church has new goals: to start a counseling ministry in the church with the eventual goal of building a ministry center; to work with other area pastors in a Knox County Network to open a Renew Clinic by the end of 2020; and to create Africa Hope University to train pastors in Rwanda.

“We have a partnership with a church in Rwanda,” said Hammond, who visited the country in July. “The (Rwandan) government has imposed a rule on all pastors in that country that they must have a Christian education in the next five years or they will be without a job.

“(The government) also has closed down many churches in Rwanda because (it is) putting more regulations on the facilities, and many churches do not have the resources to fulfill those regulations,” he added. “So we feel the urgency to help come alongside of them and to teach and train their pastors and get them the theological Christian education they need so they will be ordained

pastors and be recognized by the government.”

Starting Renew Clinic, a Christ-centered intensive outpatient treatment center in Knox County, came about following a plea from Knox County Mayor Glenn Jacobs and other county officials to address the opioid epidemic, which resulted in the forming of the Knox County Network a year ago.