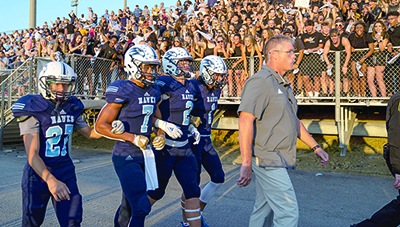 “You’ve got two choices at this point right here,” Potter, HVA’s first-year football head coach, said after the Hawks dropped a 52-14 decision to Johnson City Science Hill in the league opener for both schools. “We throw in the towel or we keep fighting, and we’re going to keep fighting.”

That’s what HVA (1-2 overall, 0-1 in the region) must do if it hopes to have any success this season.

It was the first victory of the 2019 campaign for the Hilltoppers (1-2, 1-0), who darted to an early 3-0 lead when Kade Hensley kicked a 28-yard field goal with five minutes remaining in the first quarter.

Hardin Valley would take a 6-3 lead late in the opening frame when Kelton Gunn scored on a 54-yard scamper at the 1:31 mark

of the quarter. Gunn set up his first score when he picked off

Gunn would add a 58-yard scoring run in the third quarter.

“Gunn was a good spark for us (but) it’s going to take more than one player for us to be successful,” Potter said. “We’ve got to have 11 guys on the field that are doing their job and giving everything they’ve got.

“And if we don’t have that, it’s going to be long nights like this for us.”

After falling behind, the Hilltoppers, who didn’t run the ball well over the first 24 minutes, kicked things into gear with their aerial attack.

Batchelder was 17-for-21 through the air in the first half and had two touchdown passes.

“They were hitting us pretty good with the passing game,” Potter said. “We weren’t getting much of a pass rush, and when you give the quarterback time to throw it’s hard to cover. We’ll just get back to work and correct our mistakes and look at some personnel stuff and go from there.”

Running back Chris Thomas, who scored on a 9-yard touchdown run in the first half, finished with 132 yards and scored three times on the ground. Batchelder finished the game with 340 yards and four touchdown passes.

The win was particularly special for Science Hill assistant coach Wes Jones, who started Hardin Valley’s football program 11 years ago and was the school’s head coach until the spring when he left to be closer to his family.

“I’m glad we won the game, but I wish Hardin Valley nothing but the best moving forward,” Jones said.

“This place is special to me and those are some of my best friends in the world and I watched those kids grow up,” he added. “But I’ll be honest, the kids at Science Hill really wanted to win this game for me.”