Typical restaurant it is not

From specialty breakfasts to favorite movies, Maple Street Biscuit Company has a following 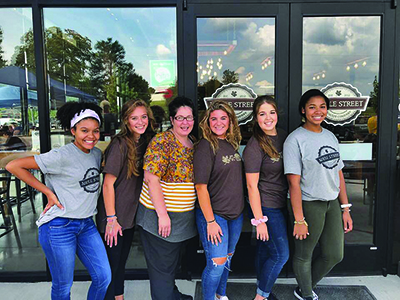 The franchise business, which has been operating along Hardin Valley Road for almost two years, already has made a name for itself, serving up specialty breakfast items and getting to know its customer based just by asking questions that might be menu-specific — or could be more whimsical.

One week, servers were asking patrons to name their favorite movies.

More recently, Iles-Johnson, who serves as the restaurant’s community leader and oversees a staff of six, said, “We asked our guests to tell us something that they loved about themselves. It’s just one way of making things more personal.”

It is also in keeping with the overall mission of Maple Street Biscuit Company founders, Scott Moore and Gus Evans, who started the company in 2012 in Jacksonville, Florida, and share the slogan “Help people. Serve others. Be Part of the Community” on the company’s website.

“We had been looking for ways to get involved with the community,” Iles-Johnson said, noting that several churches and non-profits have been allowed to host meetings and “spirit night” fundraisers on site.

“But we were looking to do something more.”

Under a previous community leader, the focus started targeting the area’s ample student population with its proximity to Hardin Valley schools and Pellissippi State Community College.

“We couldn’t figure out why more kids weren’t coming in,” said Iles-Johnson, who also noted a $5 “Biscuits and Books” promotion didn’t seem to bring their target audience, either.

“Nobody was coming,” she added. “We just couldn’t figure our why. Here we were, in front of the college, but no one was coming.”

What she came to realize after talking with area residents and Drema Bower, who works at PSCC, was the fact many students were likely unable financially to patronize the restaurant.

“When I really started looking into it, it touched my soul and took my breath away,” she said. “You wouldn’t think this community would be impacted by hunger, but they are.”

She said she found out “700 students or more” are adversely affected at PSCC alone.

Iles-Johnson and her staff started brainstorming ideas, and came up with a unique campaign that would provide meals through a “Pay it Forward” campaign, which started in July.

“I can’t do it all myself, but by coming together, and sharing it, we could do it as a community,” she said.

The program is very low key. Patrons wishing to support it simply tell the staff they want to “Pay it Forward,” and make a donation. In turn, students wishing to utilize it will state their desire to use the program.

“It’s easy, there are no questions asked,” Iles-Johnson said. “We don’t ask for student ID or anything.”

She also made it clear the “Pay it Forward” program is established for all students, not just those in college.

“We have sent out fliers to teachers, letting them know,” she added. “You never know what people might be going through or what they might need.”

Iles-Johnson said the community has been “very supportive” of the program.

“Our community absolutely loves it, supports it and are for it,” she added. “It’s just part of who we are here in Hardin Valley.

“And it excites me to come in every day and be able to share it. It’s what Maple Street is all about.”