Jacobs helps bring awareness to cause 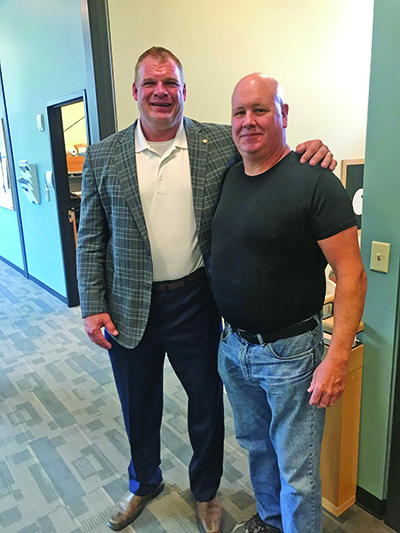 the help of Knox County Mayor Glenn Jacobs last week to help bring awareness to the cause.

He took part at the request of Vietnam veteran Ed Junod, Vet to Vet Tennessee founder and president, which facilitated the event.

Helping veterans in a variety of ways, from support and medical help to addressing Post Traumatic Stress Disorder and suicidal thoughts, Vet to Vet has branched out in recent years directly in response to the growing suicide rates, Junod said.

“Tennessee was the first state in the nation requiring all of its teachers be trained in suicide prevention,” he said, referring to the Jason Flatt Act, which was passed in 2007. “However, last month a study came out listing suicide as the leading cause of death among youth ages 10-17.

“What we are doing isn’t working,” Junod added. “Actually, everything is getting worse. We teach our teachers, our police officers and others how to respond, but we are teaching the wrong people. We aren’t teaching the youth.”

Junod had an idea that perhaps a play would be one manner of reaching the community, and he enlisted the help of Maryville playwright Tonya Lee Stoutt Brown. The result was “Worth It,” a play starring teens and targeting teens, to help promote discussion and offer comfort to those who might be suffering in silence, as well as to encourage people to reach out if they see someone struggling.

“We need all the help we can get,” Junod said. “People need to have the courage to speak up if they are in a position to save somebody’s life.”

While the premier will not be until Nov. 10 at Faith Promise’s North Knoxville campus, Junod took the opportunity last week to promote it at CUMC, where he said pastors have expressed some interest in perhaps hosting it at a later date.

“Pastor Larry Trotter has been very supportive of our Vet to Vet group, and he and youth pastor Chris Luper were very interested in finding out more about the play,” Junod said. “Pastor Trotter told me he wants to have the play here in Farragut.”

Thom Jones, a 1984 Farragut High School graduate, heard about the proclamation signing and meeting on a local news broadcast, and had the chance to briefly meet Jacobs.

Jones is not a veteran, but he lost a son and two other family members to suicide.

“I went because I don’t want anyone else to go through what my wife and I went through,” said Jones, who currently lives in Lenoir City. “I want to be a shield for others. If I could save one person, it would be worth it.”