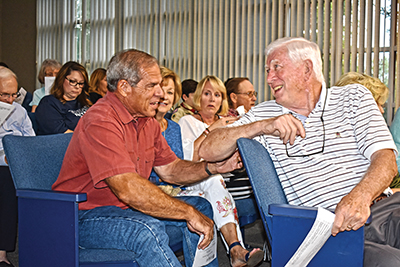 The issue was listed on the agenda as a workshop item on a rezoning request for the 32.7-acre tract, which is owned by Doug Horne, a prominent developer who owns Horne Properties, Inc., Horne Radio, LLC and Republic Newspapers, Inc., parent company of farragutpress.

“It is a workshop item for discussion only,” explained FMPC chairman Rita Holladay to the group, which had patiently waited for what was the ninth agenda item. “We are only here to gather information and are not here to discuss the merits of the project itself.

“We will hear from the staff and the applicant, and after the questions we ask get answered, then you (members of the audience) can speak,” she added.

“Hopefully we will be asking questions you are interested in also.”

Baker addressed FMPC to discuss the project and share demographic information from Continental Properties, which is the company set to build an estimated 10 apartment buildings and 10 duplexes in a community already named “Springs at Farragut” if the rezoning is successful.

“This company does a lot of research before it commits” to its projects, Baker said.

An ongoing discussion point for Town officials has been the possibility of a Town Center concept, for which the Town has created a special designation.

However, despite extensive plans being drawn up more than a decade ago, property has never been secured for construction of what has been envisioned, which has been mixed-use residential and commercial properties.

“Even if a Town Center was to get going today, the research shows the need (for apartments) would still be there,” Baker said.

“My concern is with the Land Use Plan,” which she said calls for medium density zoning and development on that parcel of land.

“I think it is a Land Use Plan problem, and it needs to be addressed,” she added as her remarks were applauded.

Horne, too, addressed the Commission and noted how he had come before it with a similar apartment concept along Smith Road several years earlier, which was ultimately denied. Instead, he sold that parcel of land to developers for what has become the almost-completed Villages of Farragut senior living community.

Horne also made note of the Town Center concept, and said he had attempted to buy former Mayor Eddy Ford’s property — one of the possible Town Center locations — but it had been declined.

“I made an offer, and they turned it down,” Horne said. “But it is not fair to deny our project if the intent is to protect another property. I know we all want a Town Center, but if you are saying here we may not get what we want because you are protecting another property … well our attorney (Horne Properties’ corporate attorney Christi Myer, who also was present) says that is illegal. You can’t deny one land use to protect another.”

Horne further stated if plans to rezone fell through for Springs at Farragut, the property might be earmarked for Senior Citizen apartments.

“We would rather do multi-family,” he added. “It is what the Town needs now, it is what professional millennials need now.”

FMPC member Noah Myers said, “What I’m seeing here is consistent with the Land Use Plan we approved.

Michael Wilson, a member of Farragut’s Board of Zoning Appeals and founder of Farragut Citizens for Responsible Growth and Government Facebook page, said he was before the group as a concerned citizen, not as a member of the BZA.

He requested the Land Use Plan be examined, then “make sure the land use is appropriate for that location” before deciding on the rezoning.

Only one outburst occurred, which happened near the end of the meeting.

Farragut resident Dustin Mills, who had signed up to speak, did not follow meeting protocol and instead, after his name was called, started addressing FMPC from the back of the room.

Holladay told him he needed to approach the podium, but he refused, telling the group he was “angry” about Horne’s comments.

“If you aren’t willing to come down here you need to be quiet,” Myers said.

Mills did not choose to approach the podium.

In response, Povlin said she understood his frustration, then suggested he and others with similar views channel that feeling into future public service.

She described how several of the FMPC members ended up on that Board, in part, because they were fueled by frustration.