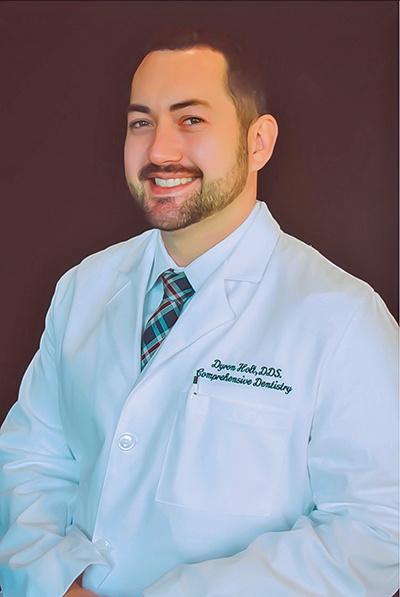 He plans to open the practice at Premier Center, 11111 Kingston Pike, next to Admiral Drive, in mid-December or early January. Holt will be providing general dentistry services — fillings, crowns and root canals — but he also has a fellowship in implantology, meaning he will be “doing dental implants,” he said. “I try to do a little bit of everything there and do it well.”

Holt explained a dental implant, a titanium post, is for someone who needs a support system for a tooth.

“It’s kind of a root, of how a natural tooth functions,” he said.

“If a tooth is non-restorable, we have the option of going back in and placing an implant and then having a crown support or coming off that implant,” Holt added. “And sometimes someone might need support for dentures or full-arch restorations. We would be able to go into the bone and place implants, give a better, more natural support system.”

A Jefferson County High School and Carson-Newman University graduate, he moved back to East Tennessee in 2016 after a residency in Cleveland, Ohio, then moved to Farragut a year-and-a-half ago.

A childhood mishap, along with getting braces, at a dental office spurred him to pursue a career in dentistry, Holt recalled.

He has been practicing in Powell for the last three years,

However, Holt said opening the practice in Farragut would mean “serving the community, getting closer to home.”

Office hours are still to be determined, as the office is still in the construction phase. “More than likely, it’s going to be Monday through Friday,” Holt said.

“And we’re going to have a late night on one night or have extended hours,” he added.

To notify the community the

office is open, Holt said he will

be sending out flyers. He currently is in the process of creating a website.

“It seems like I was always in and out of the dentist office or orthodontist office, he said. “It really became a familiar place, a place of comfort for me. Just being around the environment all the time was something I felt real comfortable with and was something I could do the rest of my life.”