New concept helps small businesses get off the ground 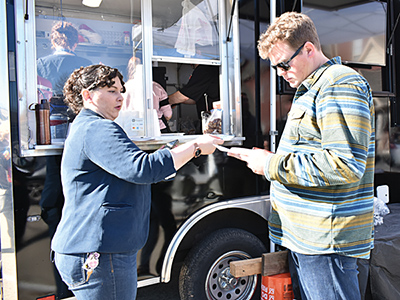 Brianne Johnson, left, of Boujie Bistro, takes a lunch order from Tyler Reynolds during the Thursday, Dec. 5, launch of The Chef’s Workshop mobile kitchen, a new business concept from West Knoxville entrepreneur Dale Akins.
Earlier this year, Dale Akins realized he had the right idea, but the wrong concept.

Seeing the challenges food entrepreneurs faced when getting started, the multi-business entrepreneur launched The Chef’s Workshop in late 2017 with the goal of constructing a brick-and-mortar commissary kitchen to rent to chefs and caterers.

Fueled by a July 2018 change in the Tennessee Cottage Food Laws, which unfunded the inspections of home-based kitchens, Akins bought a warehouse, had blueprints created and obtained a grading permit to break ground on a site in West Knoxville in early 2019.

“We were simply trying to help home based businesses stay in business by offering a commercial, shared-use kitchen as soon as possible,” he said.

But then, on the way home from his daughter’s wedding, he had an epiphany.  “The downtown venue was stunning and the dinner was great, but it is a tremendous amount of work to make it happen. I simply wondered if the chef could have saved a lot of time and expense if the meal had been prepared from an onsite kitchen.”

Realizing that a lot of really cool venues don’t have commercial kitchens, Akins called several chefs to ask if a mobile kitchen would provide this cost savings.  He quickly learned the chefs loved the mobile kitchen concept — but not for the reason he anticipated.

“It seems like common sense today, but at the time it was a real ‘game changer,’” Akins said. “Some menu items simply don’t transport well.  A mobile kitchen would tremendously level the playing field for new and small scale producers because they can increase both their menu options and their production capacity, plus smaller venues could now host larger events.

Akins acquired what was formerly a food truck equipped with an onboard generator, commercial refrigerator, sandwich prep table, Ansul hood system and a three compartment sink.  He reconfigured the layout and added a double convection oven, a 4- burner and a 2-burner cooktop, a 24-inch chargrill, two work tables and a hot box for holding capacity.

He makes it clear the mobile kitchen is not a food truck designed for short order, but rather, a mobile kitchen designed for holding capacity that will help start-up businesses cut down on front end costs and ultimately help determine if what they have is sustainable.

“This is a platform that costs $40 per hour plus the cost to propane to operate,” Akins said.  “The alternative for a food entrepreneur is to spend well over $150,000 to lease and equip a retail space. That’s a lot of money to invest in an idea.”

The mobile kitchen got the green light from the Knox County Health Department in October and the City of Knoxville in November.  The Chef’s Workshop hosted a launch party at Honeybee Coffee in West Knoxville Nov. 18 so entrepreneurs could tour the mobile kitchen.

“We have to figure out what Knoxville needs,” he said. “There may be a need for more of these mobile kitchens, or maybe the warehouse concept might still be an option,” pointing to similar offerings in larger cities such as Atlanta.

“It’s all about supply and demand,” he added.

For more information and to preview their launch video, visit www.thechefsworkshop.com