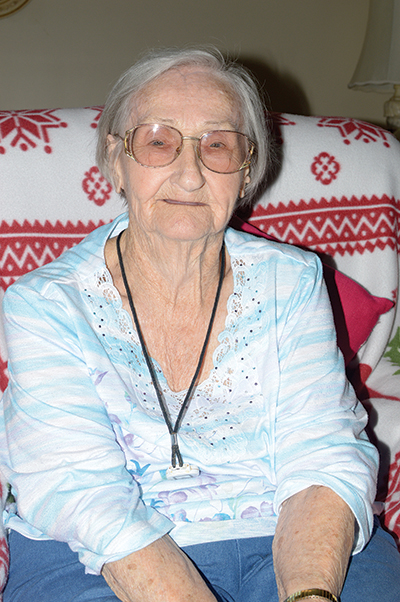 “My brothers and sisters all died in their 70s and 80s,” she said. “I didn’t expect to, but I’ve outlived all of them.

“I just think it’s a blessing from God to have such a long life,” she added.

However, that blessing comes with mixed feelings, saying most of her family members have passed away.

“That makes me sad,” she said, but then added, “I thank God I still have my memories.

“And my nieces and nephews are so good to me, and the people here (at Morning Pointe) can’t be beat.”

Her family and fellow residents and staff at Morning Pointe Lenoir City were set to join Elizabeth, affectionately known as “Miss Butch,” for a celebration on her 100th birthday today, Thursday, Jan. 2 — marking that milestone at Morning Pointe.

“We’re having a huge shindig for her,” Morning Pointe Life Enrichment director Camie Entrekin said. “She’s having a family lunch; all of her family are coming at noon. Then, at 2 o’clock, the mayor of Lenoir City, Tony Aikens, is coming to do a proclamation for her 100th birthday.”

Knowing Elizabeth’s love of music, one of Morning Pointe’s volunteer groups, Happy Trails, will perform for her. Members of her church are expected to attend and present gifts.

“And our food service director is making a huge sheet birthday cake,” Entrekin said. “So it’s an all-day celebration.”

Elizabeth advises the younger generation to “take care of yourself and live right.”

She was born Jan. 2, 2020, as the youngest of 11 children of Walter and Frances Adeline Roop, growing up in Knoxville’s West Lonsdale area across the street from Claxton Elementary School.

She remembered walking a good distance to the old Rule High School.

“They tore my old Rule High School down,” she said. “I hated to hear that, but the building was falling apart.”

Although the Roops lived in the city, Elizabeth said her father raised what they ate. “Every year he would raise two hogs to kill them for meat,” she recalled.

“I remember growing up (that) telephones weren’t the normal thing, but I think there was one in the neighborhood that we all used,” Elizabeth said.

One of her fondest memories was when the first television came.

“She said she thought that was the greatest invention,” Entrekin said.

“They used to have (an old airport) on Sutherland (Avenue) where planes started,” she said.

Elizabeth also remembered driving a car for the first time. She was older than 16.

“They were big and bulky,” she said about the cars of those times.

“Driving was the hardest thing I had to give up,” Elizabeth added, lamenting that loss of independence.

“A lot of people didn’t like him, but his family was a Christian family,” Elizabeth said.

“They still pay me (at Standard Knitting Mill),” Elizabeth said and laughed.

In 1936, she married James Roscoe Cartwright.

“I was married to him for 56 years before he died,” Elizabeth said. “He’s been gone about 25 years,” adding his Christian qualities grew on her.

Her husband was the one who gave Elizabeth the nickname, Butch. “Back then there was a program on TV, and the guy’s name was Butch,” she recalled.

“My husband kept kidding me and calling me Butch. Well, the kids (in the family) all took it up. Everybody calls me Butch, and that’s all right.”

“He was coming to their house one night, and they invited me,” she said.

While Elizabeth acknowledged Roscoe was handsome, it was not love at first sight.

“I liked him, but it wasn’t love I don’t think,” she said then laughed.

Looking back at her life, Elizabeth said one of her worst regrets is not having any children.

During World War II, after Elizabeth and Roscoe got married, he went to work building landing aircraft for the U.S. Navy, which meant moving to Baltimore.

But when he got sick, they moved back to Knoxville and lived along Jefferson Avenue for about 60 years.

She has resided at Morning Pointe about two years.