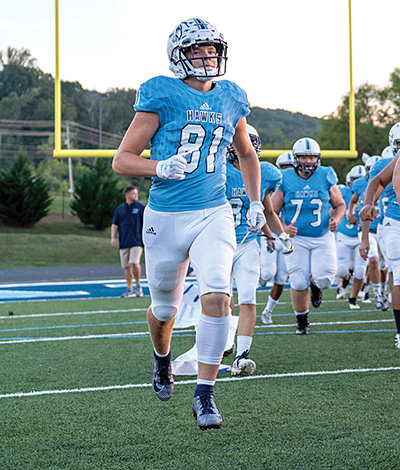 Paul Dietzel, legendary LSU Football head coach, praised many of the Vols players after UT upset his No. 1-nationally ranked and undefeated Tigers 14-13 in 1959 in Neyland Stadium. But one player stood out, describing Mike LaSorsa as “the best blocking end we have seen, the boy hit us and hit us hard.” Two generations later, in 2019, grandson Mason LaSorsa (pictured) was making tackles and breaking up passes as a junior defensive back for the HVA Hawks.
A special contribution this week from Tom Heck, a star football player at Holston High School (Class of 1971) and Tennessee Football fan who “turned down several chances to play small college ball and attend UT,” he said.

The now-retired Heck, a teacher-coach at Rule, Doyle, South-Doyle and Knoxville Central high schools, chronicled his experience as a young boy who watched the 1959 Vols upset the defending national champion and No. 1-ranked LSU Tiger 14-13 in what is now known as Neyland Stadium.

The LSU Tigers came into Knoxville in November 1959 as the defending 1958 national champions.

They were fresh off a spectacular victory over Ole Miss in Baton Rouge.

The Tigers had won 19 straight games and had not given up a touchdown in 10 of those victories, led by the great Billy Cannon, eventual 1959 Heisman Trophy winner.

Paul Dietzel, the innovative LSU coach, was asked in the preseason if he had ever taken a team to Knoxville. He said no.

He was warned that Shields-Watkins Field (before the Vols’ home was named Neyland Stadium) was not a friendly place to visit. The Vols illustrated that in the season opener, when the Orange faced the Tigers of Auburn. Auburn was riding a 23-game winning streak into Knoxville, but the Vols scored a 3-to-0 upset victory.

Dietzel was leading a change in college football with his platoon system: the “Go Team,” the “White Team” and the “Chinese Bandits.” These new ideas of football were brought to Knoxville to face the tradition of Tennessee’s single wing on Gen. Robert Neyland’s hallowed grounds.

Would Bowden Wyatt’s Vols have the character to face the challenge of the defending national champions?

I was a 7-year-old boy who had just started playing organized football with G. R. Lebow’s Knoxville Raiders. My father had tickets to the Tennessee game, and words cannot describe how I felt — I was going to my first college football game.

I remember riding a bus past Ernest and Ellis Drug Store and witnessing Homecoming decorations and floats as we approached Shields-Watkins Field. There was an excitement in the air, and the 45,682 fans were dressed in 1950s game-day attire on a cold afternoon to welcome the undefeated Tigers.

My friend Dave Nease and I have often discussed the game, and in our memory the game was a battle back and forth that ended with a desperate LSU team going for two in the last minute, in an effort to avoid a tie with the Volunteers.

With research we found that the game was dramatic, but it was not the last-minute victory that we remembered.

The first half was Gen. Neyland football. The teams battled for field position and punted backed and forth while relying on the defenses to create a turnover to turn the game to their favor.

LSU missed a first-quarter field goal and the Vols struggled to mount an offense.

In the second quarter Billy Cannon ripped off a 26-yard touchdown run to cap off a 74-yard drive to give the Tigers a 7-to-0 halftime lead.

The second half started much like the first half had ended. LSU missed another field goal in the third quarter, while Vols fans kept waiting for an offense to appear.

In a play that will live forever in Tennessee football lore, Jim Cartwright intercepted a pass and rambled 59 yards for a touchdown.

Cartwright told reporter Tom Siler, “As soon as I came down I could see a clear path. Mike LaSorsa threw a block for me and Cotton Letner kept Don Purvis away from me and that was all there was to it.”

Letner kicked the extra point and the Vols were now tied with the No. 1 ranked Tigers.

On the first play after the kickoff the Tigers fumbled, and Ken Sadler recovered on the LSU 29-yard line. The Vols took advantage, as fullback Neyle Sollee raced untouched into the end zone on a 14-yard run. Letner again kicked the extra point and the Vols now led 14-to-7.

The Tigers were stunned and the stadium was rocking, as the third quarter ended with Vols ahead.

An LSU fourth quarter punt hit Bill Majors on the shoulder, and the Tigers recovered on the Vols 2-yard line. It took three plays for LSU to score. It was now 14-to-13 with 13:30 left in the fourth quarter.

Dietzel decided to go for two, saying after the game, “We came up here to win, not to tie.” The two point conversion had only been an option since 1958, so the move was a shock to many fans.

Dietzel decided to give the ball to Cannon, who took the ball to the right on the north end of the stadium toward the scoreboard — and was stopped.

Wayne Grubb, Charley Severance and Majors stopped the “Cannon from firing” on that play, as the stadium exploded.

Cannon refused to speak after the game, but later would say, “I will go to my grave believing I was over.”

But the game was not over. LSU blocked a Majors punt and recovered it on the Vols’ 26-yard line. The Tigers moved the ball to the 16, but Cannon fumbled a handoff and Jack Kile recovered for the Vols on the 20.

LSU again ventured into UT territory, but Jim Cartwright intercepted another pass. The Tigers never again really threatened — and when the clock clicked down to zero the field was swarmed by thousands of fans.

Wyatt and game hero Cartwright enjoyed a ride off the field on the shoulders of their fellow Vols.

Dave Nease remembers his grandfather’s running from the house shouting “We beat LSU;” and that, along with the sounds coming from Shields-Watkins Field, made him a Vol fan for life.

All around Tennessee, then “Voice of the Vols” George Mooney was leading the celebration on the radio.

Daddy and I left the stadium in the middle of a wild celebration. We were as excited as those all around us.

Dietzel talked to Gen. Neyland after the game and said, “You were great. You won it like Tennessee’s been winning them for 20 years, recovering fumbles and intercepting passes.”

Dietzel also lauded many of the Vols after the game, but one player stood out, describing LaSorsa as “the best blocking end we have seen, the boy hit us and hit us hard.”

Thirty-two years after the historic victory, I was coaching football on a staff that had been formed with the merger of South-Young and Doyle high schools.

One of my fellow coaches was that end described by Dietzel in 1959. LaSorsa became a legendary high school football coach who coached at Young High, Fulton High and South-Young.

Mike was known for his defensive mind, and I had been defensive coordinator at Doyle, so we spent lots field time and planning time together.

I saw Mike’s influence on the football field at Hardin Valley Academy in 2019 when his grandson, Mason LaSorsa, was making tackles as a junior defensive back for the Hawks.

I know Mike is proud.