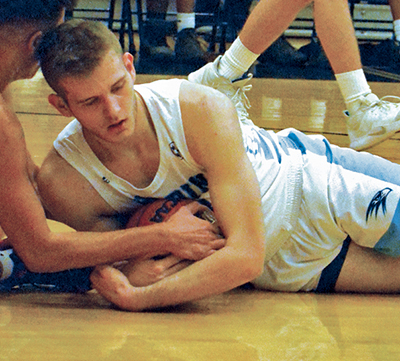 HVA senior post Avery Sonenshein, white uniform, battles a Knoxville Central defender for ball possession on the floor during this Friday, Jan. 3, game at HVA.
HARDIN VALLEY — Though 30 points closer in its Friday night, Jan. 3 rematch versus Knoxville Central than it was Dec. 7 — an 84-50 loss in Fountain City — the much closer game at HVA wasn’t much of a consolation.

After all, the Hawks led most of way last Friday, but let a 60-54 lead with under four minutes to play slip away.

Shane Chambers’ Hawks had a seven-game winning streak snapped thanks to a 12-2 Bobcats run at the end — aided by a pair of late turnovers and a controversial illegal screen call wiping out junior guard Tanner Grantham’s three-point basket with 55 seconds to play.

However, “That call didn’t cost us the game,” coach Chambers said. “We didn’t do what we needed to do to win at the end. We had too many turnovers and we didn’t execute well enough on both ends.”

Nick Liakonis, sophomore wing, and Jack Niezgoda, senior wing, led the Hawks in scoring with 17 points each — Niezgoda tossing in 15 of his after halftime with sizzling shooting.

Without the services of injured 6-foot-5 senior post Skyler O’Neal, “Obviously he would have made a difference,” Chambers said.

Bobcat guards Tevon Summers and Greg Moore led their team with 16 points each.

About playing so much better against Central in this game versus the earlier blowout, “When we played over there we were sort of in a little rut. ... We were still trying to find the right parts and jell for what we needed to be successful,” Chambers said.

“That was actually our last loss.”