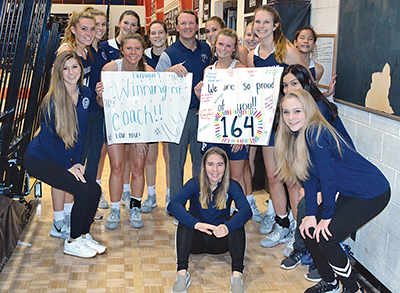 With team members making a couple of “congrats coach” posters for a team photo after the game, Barnes said about Mayfield, “I think he does a great job. He expects a lot out of us when we do get on the court (such as) boxing out and defense and running the floor.”

As Farragut improved to 13-5 overall, 4-1 in District 4-AAA action, the team’s four seniors also weighed in on Mayfield’s milestone.

“We’re just very thankful to be a small part of this big accomplishment for him,” guard Madison Hodge said. “We’re so proud of him.”

“We can’t wait to be with him when he gets a lot more, because we know they’re coming for him,” added post Claire Wyatt. “We’re excited.”

“We’re really proud of him, he leads us really well,” post Lauren White said. “He always encourages us, and it’s good for it to pay off for him like this. It kind of acknowledges all the hard work he does for us.”

“I’m just so proud of him because he loves the game and he loves the team and he loves (coaching) all the girls so much,” injured guard Hailey Johnson said. “He’s put so much work into this. It’s so good to be a part of this.”

“He relates so well to the girls and girls basketball,” Dodgen added.

As for Barnes’ exceptionally hot hand early, “I felt it warming up,” the junior said, adding she decided, shortly after the opening-game tip-off, “I’m going to go for it.

“I didn’t know I was going to be that on tonight,” added Barnes, who ended with a game-high 24 points (eight 3-pointers overall).

“It’s funny: she hadn’t really been shooting the ball well,” Mayfield said. “We’ve been telling her, ‘shoot the ball, shoot the ball.’”

Other FHS scorers were Keeleigh Rogers, sophomore point guard in her first game back from a nine-game absence due to injury, finishing with 19. Wyatt scored 14 and Avery Strickland added nine, while White and Ashlyn Sheridan tossed in four each.

About his milestone, “I had honestly forgot about it,” Mayfield said. “We’ve been sitting on that number (163) for a while.

“There’s a lot of good players who have obviously led to those wins,” he added. “Hopefully we’re looking forward to a lot more.”