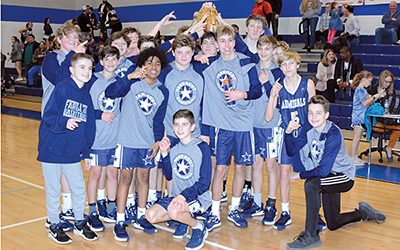 The Admirals (10-5 in KCMSBC play) won three games in the final week of the season and will be the seventh seed in the tournament.

One of Farragut’s victories was a 43-25 win at rival Hardin Valley Thursday, Jan. 9, which earned the Ads the Golden Turkey Trophy for a second straight season.

“This was a pretty well-played game, I thought,” said FMS coach Randy Swartzentruber, dean of county middle school hoops coaches. “As our defense goes, we go.”

Two-time all-county standout post Alex Doerger, who was injured early in the 2019-2020 campaign, scored 14 of his game-high 21 points before halftime.

“It’s nice to have him back,” Swartzentruber said. “I’m certainly not complaining about it. We can play big and we’re locked in to the seventh seed.”

Against the Hawks, Eli Evans scored eight points and knocked down a pair of 3-point baskets.

Hardin Valley (5-10) got seven points by Will Kline and five from Rylie Gladwin.

“We played in some close games this year and we have several eighth graders who are new to our program this year,” HVMS head coach Dylan Rayho said. “... Our eighth graders have bought in and these kids have come in here and gone to work every day. As a coach, that’s all you can ask.”