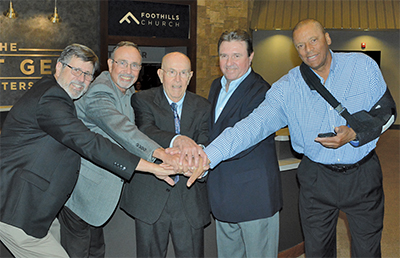 Hundreds were on hand in Foothills Church Theater in Maryville early Saturday afternoon, Jan. 11, to memorialize the late Arthur Pete Billingsley, Farragut HIgh School Class of 1972 and former Admirals star basketball player who was induced into the FHS Sports Hall of Fame. Remembered most fondly for his influence as a coach, teacher and Christian leader while at Maryville High School, as expressed during a roughly 90-minute service, several former FHS classmates. teammates and coaches were on hand. Three of his teammates join then head coach Lynn Sexton, center, and then assistant coach Jerry Cannon, second from left, in a show of solidarity. From left are ex-Admirals Mark Priode (Class of 1972); Glenn Harness (Class of 1974) and Willie “Bones” Almond (Class of 1972).
A pioneer by circumstance, yet a sacrificial lamb by choice: that sums up, perhaps, the two most important impacts of Arthur Pete Billingsley’s life.

Not even a teenager, Pete was breaking the athletic color barrier at what was then called Farragut Elementary School (kindergarten through eighth-grade) in the mid-1960s.

It’s no wonder why Roy Stone, one of hundreds to attend a Memorial Service in honor of this 1972 graduate of Farragut High School, had a point to make about a man praised more for his selfless walk with Jesus Christ, as a devout Christian, than for his abundant basketball skills that earned him All-state honors and a scholarship to Carson-Newman University.

Referencing now-retired Farragut Elementary/Middle School basketball coach and teacher Bobby Henry, “All he talked about was Pete Billingsley, what a wonderful man he was,” he said about Henry’s respect for Pete while Stone (FHS Class of 1981) was a student/athlete of Henry’s at FMS.

“I started the basketball program in ’65. … He was my first black player,” Henry said about Pete, whose life and service to community were remembered during a roughly 90-minute ceremony in Foothills Church Theater in Maryville, where he was a member and leader, Saturday afternoon, Jan. 11.

Passing away Dec. 6 following a heart illness, Pete was 65.

As for his Christian impact as a football coach, Fellowship of Christian Athletes leader and biology teacher at a number of area high schools who also performed special professional duties, three former Maryville High School student/athletes — who joined Pete in helping win a football state championship in 1998 — each had to fight back tears while sharing “personal reflection” during the memorial.

“Pete is one of those guys in my life that it’s hard to pare down to just an opening remark, what he meant to me,” Jonathan Sweet said.

“… When I was about 15 years old there was something that came out of nowhere … that maybe came straight from the throne of God and crashed into me,” he added. “The mark that he left on my life is substantial.”

One year later at MHS, “Pete convinced me there was nothing more important on this planet than the Scriptures and getting closer and spending time with Jesus Christ,” Sweet said. “He said it with such authority, such conviction.”

About Pete’s determination, “If he felt like he heard from God on a matter, he was going to make it happen,” Sweet said. “… Pete chose to live in abject poverty for years of his life … just to minister” despite being “a college graduate; he was a providential secondary educator and an experienced football coach.”

Pete’s popularity seemed to overpower whatever elements of racism existed at FHS in the late 1960s and early 1970s.

“When he went to Farragut High School, he was class president three out of four years,” Henry said. “And the other year he was vice president.

“He was super popular.”

“You rarely ever saw him where he didn’t have a smile on his face,” said Glenn Harness, fellow teammate (Class of 1974).

“He didn’t have any weaknesses,” Harness said, noting Pete’s then-school record 45-point game, long before the three-point shot came around, against “Oneida” during the 1971-72 season.

“I remember the love Pete had for the world and the kids, our youth,” said Kyle Dupree, another former MHS student/athlete memorializing Pete’s impact on lives. “… Unconditional love, being there in times of need.”

Chance Oliver, yet another former MHS student/athlete speaking, said about Pete, “The circle of his influence was so large.”

Using the letter “L,” Oliver first defined Pete as “loud … even his whisper sounded like that muffled base sound of a car driving by (which drew laughter).”

Then came “laughter,” with Oliver saying, “man that dude loved to laugh. He was a cut-up.

“The next word that comes to mind is ‘lesser.’ … He always made himself lesser than others,” he added. “… He was always more content helping you out.”

Then came “‘love.’ … Pete didn’t do anything halfway. … He would quickly use his love to connect with anyone he came in contact with,” Oliver said.

The final was “legacy,” saying Pete left behind “an embarrassment of riches.”