Hundreds of gifts in tow, FDCC hits the road 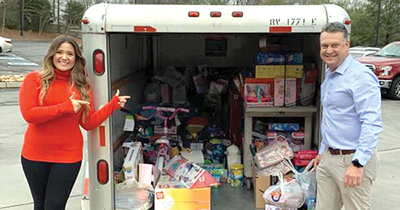 Children lit up as they received gifts and were treated to a party Tuesday, Dec. 17, at The Walter P. Taylor Boys & Girls Club along Western Avenue in Knoxville.

“This toy drive has continued to grow, with this year being the biggest and best yet,” she added.

Normally the party has taken place at Fox Den. However, Inman said sickness and weather tried to get in their way this year.

Boys & Girls Club organizers “had to reschedule once because of weather and tried to a second time due to sickness of their bus drivers, so we rearranged and went to them,” Inman said.

She and FDCC general manager Ryan Ott loaded up a U-Haul and hit the road with the almost 600 toys in tow.

During the party, “the kids got to decorate Santa hats, play holiday Bingo and pick out their very own toy from the drive,” Inman said. “To top off an already amazing evening, Santa himself made a special visit to The Club.

“None of this would be possible without the generosity of Fox Den’s amazing members who make this event bigger and better each year. Some of Fox Den’s members even went to Walter P. Taylor to make sure that these kids had the best party yet.”

“It was such a special and rewarding night,” Ott said.

“The Fox Den staff and members were just as excited as the kids.”

“It was really a special evening, and we should be so proud,” FDCC member Buck Jones told Inman, who initiated the relationship with The Boys & Girls Club, the holiday party at Fox Den and FDCC’s Backpack/Back to School Drive.

For more information about The Boys and Girls Club of the Tennessee Valley, call 865-232-1214 or visit https://bgctnv.org.