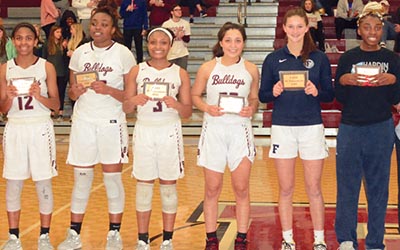 “Coming off the Maryville game (a semifinal round loss Friday night, Feb. 21), we knew we would come out hard, and we just out-hustled them,” the sophomore wing said. “We really didn’t give much effort last game, and I knew I had to come off hot to get us started.

“She’s a fantastic player,” FHS head coach Jason Mayfield said of Strickland, who joined senior post Claire Wyatt on the All-Tourament Team. “And the thing that makes her so good is she works so hard.

Other FHS girls came through late to stave off the Lady Mountains’ attempt to rally, as HHS shaved an 11-point third quarer lead to 52-51 until Strickland’s late three-point basket.

“They’re all defensive things,” Mayfield said. “A lot of defensive rebounds there. Heritage is a good team — they’re explosive.

“Madison, Keeleigh, Ashlyn were playing that stretch without Claire on defense because she had four fouls,” he added. “Claire is our leader ... and she’s our best help defender, too.”

“Coming out we wanted to focus on making a statement,” Hodge said. “I feel like we started strong, and then maybe lost it a little bit in the middle.

“But we kept on fighting back.”