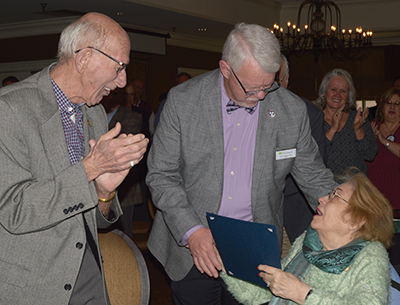 Overwhelmed with joy, “Mother Rotary” Joan McIntee receives a proclamation from Farragut Mayor Ron Williams, center, declaring Wednesday, March 4, as “Joan McIntee Day” in Town, as “Father Rotary” Gene Wessel applauds during a Rotary Club of Farragut meeting where this 32-year Rotarian was honored in Fox Den Country Club. Joining RCF in 1990, Joan earned the moniker, “Mother Rotary” because of her long history with the club and, as with Wessel, she was quick to make sure everything was done right, RCF public relations chairman Tom King said.
A full house of The Rotary Club of Farragut and 13 Rotary Club of Tellico Lake members, plus Farragut West Knox Chamber of Commerce representatives gathered to honor and bid farewell to Joan McIntee during an RCF meeting in Fox Den Country Club Wednesday, March 4.

Joan, affectionately known as “Mother Rotary” by fellow Rotarians, and husband, Jim McIntee, are heading to Columbus, Ohio, this month to live closer to her daughter, Jeanne, one of the McIntees’ six children. Joan and Jim also have nine grandchildren and one great-grandchild.

“This is my last meeting,” she said.

“Your moving leaves a void (in RCF),” he added.

As the club prepares for its 40th anniversary celebration April 22, its members surprised Joan with plaques, praises and a special proclamation in her honor.

Overwhelmed, Joan exclaimed, “I had no idea.

“I thought I was coming to visit with (Rotary Club of Chattanooga and Rotary International past president) John Germ, but this is a total surprise,” she added. “It’s unbelievable.”

During the celebration, Farragut Mayor Ron Williams read a Proclamation, which proclaimed March 4 as “Joan McIntee Day” in Town — inciting a standing ovation.

RCF president Staci Wilkerson presented Joan with her Paul Harris +8 pin with two rubies, meaning she and Jim have contributed more than $9,000 to Rotary Foundation and Polio Plus.

She also received a lifetime membership in RCF, a plaque and diamond from Rotary Club of Tellico Lake, which she started in 2001.  As Joan was FWKCC’s first “diplomat” – now called ambassador – many years ago, she was presented with the Chamber’s Presidential Award.

Julie Blaylock, RCF member and current FWKCC president/CEO, recalled Joan’s kindness in bringing her laminated copies of articles about Blaylock through the years.

“(Joan) cares for everyone around her,” Blaylock said.

“You don’t often realize how someone has touched your life until later on,” said former FWKCC executive director Bettye Sisco, also a Farragut Rotarian, as she gave Joan a FWKCC plaque.

“Joan  was a mentor to me. She was also my friend,” Sisco added.

Gene Wessel, known as “Father Rotary,” evoked laughter when he presented her with a pair of shorts.

King said Wessel wears shorts regularly in the summer because he plays golf all the time, “So we call him Legs.”

Joan had been in Rotary for 32 years with perfect attendance.

Joining RCF in 1990, she was elected its first female president for the 1994-95 year, was a former assistant district governor, RCF’s club historian for more than 20 years and served on the district conference credentials committee for 10 years, four of which she was its chairwoman.

She also held other district-level chairmanships and was a longtime faculty member of District 6780 Leadership Academy. Previously, Joan was in a Pittsburgh, Pennsylvania club.

“This (Rotary Club of Farragut) has been a great part of my life,” Joan said, then encouraged members to “get involved.”

King remembered there had been a Mother and Father Rotary before he joined the club in 2005.

“That’s one of the first things I learned – you were ‘Mother Rotary’ and (Gene) was ‘Father Rotary,’” King said.

Gene, a 48-year Rotarian, was in the first club ever formed in Chicago and joined RCF in 2001. Gene and Joan earned the nicknames because of their dedication and knowledge.

“Their monikers are a form of respect for their long tenure as Rotarians and their intimate knowledge of all things Rotary-related,” said past president Jim O’Brien, who was sponsored by Joan when he joined the club.

King also related how Joan was “beside herself” looking for her badge before the meeting.

Eliciting tears from Joan, he presented her with the badge, now framed.