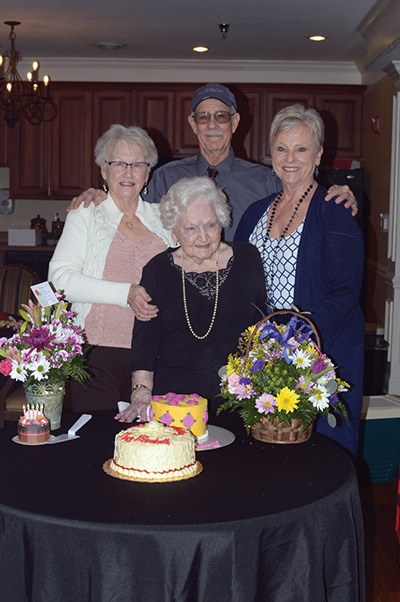 “It surprised me living that long,” Mary Elizabeth added. “I never dreamed I would.

“No one knows how long. It just happened that way. It’s a blessing … I feel pretty good. I don’t have anything to worry about.”

As for her routine, “I get my hair done once a week, take care of myself and buy good clothes,” Mary Elizabeth said.

At 95, this energetic senior citizen was still driving

“I had a pretty Cadillac, the sports model,” she recalled.

For the younger generation, Mary Elizabeth advised, “Live a clean life. Don’t tell tales and stuff like that, and don’t repeat what you hear.”

She also attributed her long life to watching her health and never smoking, though she did enjoy a Scotch and soda every now and then.

friends and staff at Morning Pointe – Lenoir City on her birthday, Thursday, Feb. 27.

She was born Feb. 27, 1917, in Chattanooga to Otto and Pearl Hicks Hassler and grew up with a brother and two sisters.

“I fell in love with him in school,” she said, recalling it was love at first sight. “He was so smart and outgoing.”

The Parkers raised two daughters, Janice Parker Kennedy and Jevonne Parker Hall, and she has five grandchildren, three great-grandchildren and one great-great grandchild.

“She was very business-like and organized about family, events and activities,” Janice recalled of growing up with her mother. “She was a phenomenal homemaker. Better Homes and Gardens could have come into her home and done a photo shoot any day they wanted without advance notice.”

The Parkers moved to Lenoir City when her husband, a trial lawyer, was offered a job in town.

“I went to court one time (to see her husband),” Mary Elizabeth said. “He didn’t want me to. It made him nervous.”

Yet, when asked about her favorite invention, she replied, “A fine husband. He was a very pleasant person. He showed me that he loved me.”

When the Parkers took up traveling, Mary Elizabeth remembered she loved the organ, but quit playing.

The couple had traveled to New York; London, Paris and other areas of Europe. “They are good memories,” she said.

“We’d both go hunting rabbits,” she recalled, smiling. “What you do is you are right quiet and you slip around.”

During World War II, Paul and Mary Elizabeth were separated when Paul went to work in the shipyards in Baltimore, while she stayed in Tennessee.

“He had already graduated (from law school) at that time,” she said. “When the war broke out, instead of signing up to go to war, he went to Baltimore.

“That was awful,” Mary Elizabeth added about the experience. “He was there as long as the war was going on.

However, “They let me have all the baby food I wanted. A lot of people were eating (the baby food) instead of giving it to the children,” she said.

After Paul died 20 years ago, Mary Elizabeth said she never looked to marry again. “He was the love of my life.”

Moving to Morning Pointe to live closer to her daughter, Janice, “I love to play Bingo,” she said. “I play three times a week.”’

In her younger days, she enjoyed sewing.

“I made my daughter’s wedding gown when she got married,” she said. And, “they said I was a good cook.

“I loved to cook,” she said. “I made it for dinner parties. I loved spice cake.”

”Mom lived on her own at Echo Ridge (independent living retirement community) for 18 years (before coming to Morning Pointe),” Kennedy said. “Moving here at 103 has been a challenge, but she has met the challenge.”