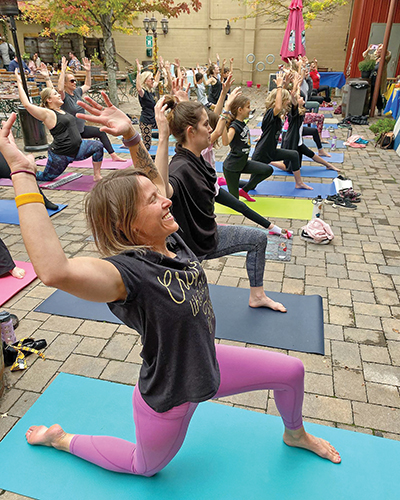 Through the five years, the studio has given back to the community through fundraisers and volunteer time for various charities, such as cancer support, Volunteer Ministry Center, Young-Williams Animal Shelter, Tennessee Mental Health Association and Africa Yoga Project.

From the beginning, she started having fundraisers, and to date the studio has raised more than $80,000.

“Community is one of our pillars in the studio,” Mishu said. “It’s all part of the yoga process to work on finding this essence of joy within yourself and then being able to allow this joy that we believe is our true nature, to move it out into the world … use yoga as a vehicle for social change.”

While she was involved in the yoga world for quite some time before moving to Knoxville, Mishu said she felt something was missing at other studios.

“I just had some ideas about how we could be different,” she said. “I believe that community was not emphasized (at other studios) and was not offered. I just really wanted to make these changes to a yoga studio, when I opened mine.”

She wanted “community” to be two things: to create an essence of community among the studio’s members and to create social change.

“I wanted it to be something that, when people come in, they feel this essence of community, they felt this essence of support, because we live in a world that is so unconnected because of this digital environment that we live in,” Mishu said.

“I wanted to offer almost a sanctuary, where people felt that this was a place where they were accepted no matter what they looked like or how much they practiced before or what physical limitations they had.”

She also wanted the community to “stand for what we could do together, as a studio.”