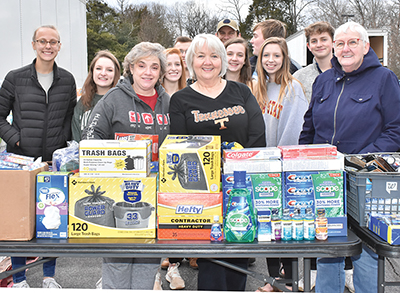 The Compassion Ministry from Cornerstone Church of God and Christ Covenant Church, The Pinnacle at Turkey Creek Shopping Center, the girls lacrosse team from Farragut High School and the Farragut West Knox Chamber of Commerce all responded to the needs of hundreds who were left without homes, supplies and basic necessities.

“When I heard about it, I thought, ‘Where do we go? What do we do?’” said Robin Rolland, executive director for Compassion Ministry, which typically serves rural Appalachia with food and other needs. “I spoke with one of our board members, Todd Burnett, who is a judge in Fentress County. He said, ‘We’re OK, but Cookeville is a disaster zone,’ and I knew I had my answer.”

Burnett’s wife, an assistant principal at Cornerstone Elementary School in Putnam County, offered the school as a distribution center, where items were taken Tuesday, March 10, following several days of donations. “I knew it was certainly a God thing when their school had the same name as our church.”

Rolland estimated “hundreds” of donors responded to the call, where donations of diapers, water, hand sanitizer and food,

including Gatorade, had filled one semi-tractor trailer and an RV by the weekend, and more items continued to be donated through Monday afternoon, March 9.

“We had extra food donations recently, and it was as though the Lord knew we would be needing them,” Rolland said.

The FHS girls’ lacrosse team also held a drive last week, asking for donations of paper supplies, diapers, cleaning wipes, hand sanitizer and other needs in lieu of admission to the March 5 home game against Putnam County, which ultimately was postponed. They had several cars full of items by Friday afternoon, March 6.

“Cookeville is in our region and we play them every year,” said team sponsor and FHS teacher Amy McWhirter. “We were supposed to play them last Thursday, so the team wanted to do something immediate for them. The game ended up being postponed due to the destruction in their area, so we will play them at a later date this season.”

Ashley Slimp, marketing coordinator with The Pinnacle, estimated about 20 people dropped off donations, filling a fourth of a 50-foot trailer.

“This was a great turnout for a 24-hour collection effort, and we were amazed by the incredible generosity we experienced this week,” Slimp said.

Farragut West Knox Chamber of Commerce’s board of directors voted to make a $500 donation.

“These are the only official funds where 100 percent of proceeds go to victims,” Blaylock said.

the overnight hours of Monday, March 2, and Tuesday, March 3, killing 25 residents, and destroyed or damaged hundreds of homes and buildings.