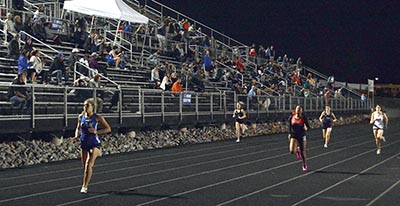 It’s especially impressive “because he’s never done track before,” the coach added. “Probably the biggest one we’ve been waiting to get an appearance on. … He’s a football kid. He’s done really well in long jump in practice.”

One of those 800 runners is junior Lance Simpson, an FHS golfer “who ran a 2.03 tonight,” Allison said. “He’s getting back into track after three or four years. He was really good in middle school.”

“I think Scott Grunau ran a 50 (seconds), which is going to put him in the top five in state right now,” the coach said about the senior.

Senior Evan McFerran, another 4 X 400 team member, won both the 100 and 200 dashes, while Jonathan Shved finished first in pole vault.

On the girls’ side, “Another surprise for us was Annabelle Ekern in the 800,” Allison said about the freshman “who came out and ran a 2:26, which is going to put her in the top five in the state right now.”