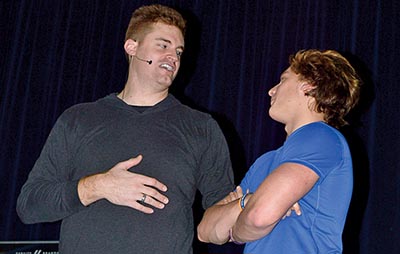 Kevin Atlas, left, the first-ever “one-armed” Division I NCAA basketball player, interacts with Logan Foody, Farragut High School junior and FHS football player, during Atlas’ address in the school’s Vickie B. Wells Auditorium Tuesday, March 10.
Farragut High School students were challenged by Kevin Atlas, a 6-foot-11, one-armed NCAA Division I basketball player — born with only part of his left arm — to believe in themselves and support others at an assembly in FHS’s Vicky B. Wells Auditorium Tuesday, March 10.

“By the end of this thing, I’m going to rewire your brains and give you everything I have.

“You deserve to be happy; you know that?” he asked the students.

“Empathy is a superpower to all my successes,” Atlas said. “To be a real leader, to be happy … the best character trait is to put yourself in other’s shoes, seeing the world in their eyes.”

About his left arm, “Yeah, God’s got jokes,” said Atlas, who was born on a Friday the 13th and Good Friday. “I came out, and I was a little messed up. I was supposed to be left-handed, too.

Saying he was “a poor kid living in a rich neighborhood,” Atlas added, “We didn’t have money and my parents had to work two jobs to support us.”

Since he didn’t see his parents often, he had no home structure and fell behind academically.

“I didn’t read until I was in the third grade,” he said. In school, he was diagnosed with ADHD and dyslexia, needed glasses, was color blind and was placed in a special needs class.

His father was diagnosed with cancer when Atlas was in the third grade and died two years later. “It kind of broke me,” he recalled.

However, he returned to school as though nothing had happened, wearing a mask. “So … if you’re wearing a mask, there’s light at the end of the tunnel,” Atlas said.

Atlas first got introduced to basketball in the seventh grade, but his coach told him, “basketball is a two-armed sport” and cut him from the team.

However, “some dude came into my life,” he recalled. A coach of a travel off-season club from a neighboring town “changed my life, changed my perspective.

“One day, he came up to me and told me to use my arm as a weapon,” Atlas added.

“(The coach) allowed me to embrace it. Everyone has a nub in our own way. You own your nub. If you can’t embrace it, how are you going to open your heart to others? Love yourselves.”

Looking back, “I accomplished all my hopes and dreams in basketball,” he said. “I’m blessed with my successes.”

Atlas also is an author, started four companies, served on the board of Special Olympics, was a spokesperson for Boys and Girls Club of America, is an entrepreneur, is married and about to be a father. A documentary of his life, “Long Shot: The Kevin Laue Story (his real last name),” is on YouTubeand a movie also is being made of his life.

The appearance was one of 300 in Atlas’ nonstop tour to challenge students and faculty members.

“It was something else,” sophomore Alyssia Davis said. “The teachers want us to be happy … It help so much more seeing someone who shows you can make a difference.”