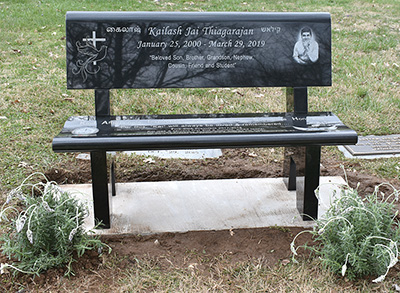 A grieving mother has created a tangible way to honor and remember the beloved son she lost to suicide almost exactly a year ago.

Kristina Thiagarajan personally designed a granite bench, which was placed in Pleasant Forest Cemetery Wednesday, March 18, in honor of her son, Kailash, better known as Kai, who died March 29, 2019, while a student at the University of Tennessee.

Kai was an honors student and student leader at Farragut High School and had graduated in 2018. He proudly served in many clubs — most notably as Student Government president from 2017 to 2018 — and also was a member of the FHS track and field team among his many accomplishments.

“I am very proud of Kai, and I miss him terribly,” said Kristina, who is not alone in her grief, as Kai was one of several former or current FHS students who took their own lives over a two-year span.

Kristina said she had been thinking of a way to honor Kai since last summer and also provide a place where his friends could gather to remember him.

“I had a lot of his friends ask me where he was buried,” she said, noting that ultimately she and her son’s ashes will be buried together in Washington state.

Kristina first considered placing a bench at FHS, but after prayerful consideration ultimately decided on putting it in historic Pleasant Forest, which lies along Concord Road, and bought a plot in its crematory garden area late last year.

“His whole life was spent in Farragut,” she said. “He loved Farragut, and he loved his life here.”

Kai also was “fond of the cemetery,” Kristina said. “When he was in Farragut Intermediate, they had a field trip to the cemetery to help care for the grounds and learn the history.

“When he came home he was so excited about the history and told me all about it.”

Additionally, she discovered “three Farragut schools’ teachers were buried (there), and that made it seem like the perfect spot, and I bought the next available plot,” Kristina said of the location, which is not far from the cemetery’s entrance.

Not only did Farragut impact Kai, but he impacted the community, too.

“Kai helped the Town of Farragut, FHS and Two Rivers Church to be a better place by volunteering, because he really, genuinely loved compassionately and cared for people,” Kristina said. “It is the spirit of Jesus that Kai tapped into and was able to love others so well. “

The bench was created by Maryville Monuments, where Rebecca Presnell offered input, Kristina said, and was funded by many family members and friends. It was carved from India Black Granite in honor of Kai’s father’s nationality.

It features Kai’s portrait, along with his name in English, Sanskrit and Hebrew, as well as the insignias for SGA and track.

Along the seat portion, Kai’s full first name is spelled out with accompanying descriptors: “Kind, Affectionate, Inspirational, Loving, Altruistic, Supportive and Honorable — For this, Kai will always be loved and remembered.

“Kai was a servant first, and a humble, gifted leader,” his mother inscribed. “He served everyone passionately with all his heart. His leadership style reflected his spirit, the quintessence of Galatians 5:22.”

“They were wonderful, and so helpful,” she said.

Kristina also planted sprigs of lavender at the base of the bench.

“Kai loved lavender,” she said. “I often had sachets, and he enjoyed the smell and how it has the power to calm.”

She is grateful for her friends — among them, several mothers whose children also have been lost to suicide — and Kai’s, who have rallied around her since his death.

“I’m just glad now that his friends will have a place to go and remember him,” she said. “The bench offers a quiet place to rest, pray and reflect on this global epidemic of suicide that stole someone so kind, loving and beautiful from us.”