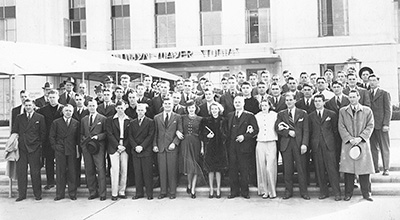 It was announced on Sunday Dec. 10, 1939, that the Tennessee Vols were headed to the Rose Bowl to play the Southern Cal Trojans. Head coach Robert Neyland confirmed the invitation with the simple statement that the Vols were “happy to go.”

Knoxville was excited. The Rose Bowl was the dream destination of every college football program, and UT had its distinguished graduate, Clarence Brown, in Hollywood waiting for their arrival.

Brown had graduated from Knoxville High and then from the University of Tennessee in 1919. He was a successful Hollywood director and huge Volunteer football fan. The Vols had a special host to entertain them in the movie capital of the world.

Knoxville also was filled with controversy. UT administrators had stated the band and cheerleaders would not go.

It also was revealed not all 45 of the varsity players would make the trip. Students were outraged and threatened protests.

George Cafego was named to a majority of the All-American teams, but had struggled late in the season with a knee injury.

Would coach Neyland’s star be ready to face the Trojans?

By Dec. 19, all 15,000 tickets provided to UT had been sold. The News Sentinel printed the best driving routes to the Rose Bowl and advertised round trip train trips to California.

In late December the Sentinel had pictures of young Vol fans, including two uniformed band members, hitchhiking to the Rose Bowl. Many Vol fans headed west in their cars, including Joe Higdon.

The Vol Special was welcomed to then Maj. Neyland’s hometown of Greenville, Texas, by pouring rain and excited fans. The major canceled practice and the train sped further west to El Paso, where UT conducted a full fledged practice in the Sun Bowl.

All looked good as George Cafego ran through the entire practice, and both the major and trainer Mickey O’Brien were encouraged.

The Vol Special arrived in Pasadena Dec. 24 to a rousing welcome. The band played and the Vols stepped off the train to a welcome from 5,000 fans.

Among those in the crowd was UT student and future Hall of Fame sportscaster Lindsey Nelson. The team went to the Rose Bowl and had a light workout.

Clarence Brown threw the Vols a Christmas party at his ranch. The Vols and their fans were welcomed by beautiful actresses and western movie stars as they discovered the glamour of the Hollywood lifestyle at the famed director’s home. The boys swapped stories with Lana Turner, Tom Mix, Roy Rogers and Eleanor Powell.

George Cafego, though, was absent; he had reinjured his knee and stayed at the hotel treating his injury.

Next was a visit to MGM Studios where the Vols rubbed elbows with all the stars.

Brown threw a huge lunch at the Zebra Club where the Smoky Mountain boys sat with Hollywood stars and were addressed by Louis B. Mayer. Mayer asked the Vols “to produce more men like Clarence Brown and send them to Hollywood.”

Lunch with the stars and tours of movie sets certainly was different than watching a movie in the Tennessee Theatre; the Vols were a part of “La La Land.”

Henry McLemore, UPS writer, wrote how surprised he was at the freedom the Vols were allowed by the major. He said, “Major Neyland has been the most lenient of visiting coaches in many years. The boys have been beautifully entertained. ...”

Famed sportswriter Grantland Rice wrote, “The Trojan power was too much for the Vols to cope with.”