Seasons feeds 1,300-plus to help staff during closure 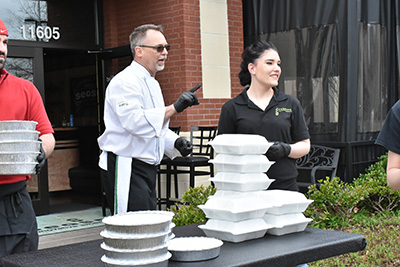 Seasons Innovative Bar & Grille may be among countless establishments that temporarily closed last weekend in an attempt to stem the Coronavirus COVID-19 threat, but owners Deron and Sheah Little made sure their employees benefitted from one last mega-meal extravaganza.

“We frequently host fundraisers for others in the community — we thought we would do one for our people today.” Deron said Saturday. “When we first opened, 14 years ago, I said then our employees are what will make us different from anyone else, and they have.

“Our folks give 100 percent every day, and we wanted to do what we could to help them now.”

Suggested donation was $10 per meal, and after announcing the event through social media, eager diners began lining up more than an hour ahead of time, snaking through two parking lots and out onto Parkside Drive.

Patrons waited patiently — some as long as two hours — including Rotary Club of Farragut member Tom King, who picked up several dinners.

Farragut Alderman Scott Meyer also supported the effort, which was captured on film by a Seasons staffer and posted to Facebook.

“The turnout has been unbelievable,” Deron said. “My heart is just so full.

“We love our staff — we would be nothing without them,” said Sheah, who worked right alongside her husband and other staff members, hustling to keep up with demand while additional Seasons employees helped direct traffic.

The fundraiser continued for almost three hours, ending only when the food ran out.

“So happy to support a company that is supporting its staff,” Hope Hodgson Waite commented on Facebook.

“It was amazing,” Melanie Joy Smith said. “Thank you to our fave restaurant and blessings. It was delicious.”

“What a great idea and a great meal,” Eloise Frazier Montgomery said.

“That was tasty,” Marshall Scott said. “We’ve never been to Seasons before. Looking forward to returning sometime down the road.”

Seasons staff were touched by the outpouring as well.

“It was overwhelming in the most amazing way,” said Justin Bliss, who oversees Seasons’ branding and marketing. “I believe we all had an idea it was going to be a huge day, but it tripled our expectations. “I don’t know if many other communities around the world would show support the way Knoxville just showed us.”