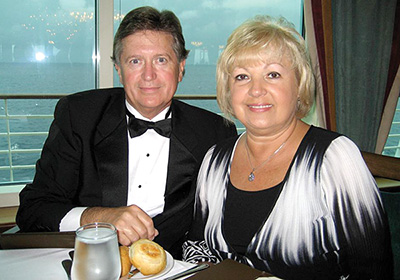 Boyd and Doris Beets, both 67, allegedly were shot by Ronnie Edward Johnson, 31, of Alcoa after he crashed his truck into the front of their Live Oak Circle house while searching for his girlfriend, Amy Clarkson, also of Alcoa, according to Knox County Sheriff’s Office reports.

The report also stated the couple had been fighting in Johnson’s truck, and Clarkson managed to escape and run to the Beets’ home, where a front porch light was shining.

Clarkson knocked on the door, and Johnson attempted to run her over as she was on the porch, and ended up inside the residence, the report further states.

Encountering the homeowners, Johnson allegedly shot them both after exiting the vehicle. Clarkson again ran from Johnson, who continued to chase her.

Officers had been contacted by nearby residents who heard the crash and the gunshots, according to the report.

The KCSO Major Crimes Unit is leading the investigation.

“Please keep the family of the homicide victims in your prayers,” KCSO Information Officer Kimberly Glenn stated in a press release. “This was truly a random event that resulted in tragic loss of life.”

“She was just a wonderful lady and a stellar employee,” Wellons recalled. “She loved the children and was just a fabulous person.”

The Beets were members of First Baptist Concord.

Jayne Finch Atkins was a third-grade teacher at FIS, and remembered Doris as “always having such a pleasant smile on her face at work.”

Another teacher, Shea Whaley, noted that Doris “laughed often and worked hard for those she assisted at FIS.”

Just two months ago, Boyd Beets had received a 45-year service certificate from Oak Ridge National Laboratory, where he was an engineer in the Electrical System Engineering and Integration Group.