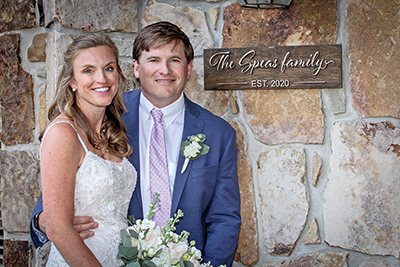 Coronavirus has halted many things over the last few weeks, but it couldn’t stop love.

Hardin Valley Academy principal Rob Speas and his fiancée, Knoxville West High School principal Ashley Jessie, were set to marry Sunday, March 29. Despite having to change the venue and postpone their Cancun honeymoon, they were able to exchange vows on their chosen day.

“We had just moved in our new house (earlier that week), so we married here,” Ashley said via phone last week.

“It was great,” Rob added. “Our children, our parents and Ashley’s brother’s family were able to attend.”

Initially planning a wedding that had nearly 300 RSVPs, the couple had to compromise on the

reception, sending out an e-mail blast notifying guests of their plans for a “drive-through” reception at their home in Duncan’s Glenn, off Northshore Drive.

“It was awesome,” Ashley said. “We were out there (outside their house) for an hour waving to everyone who drove by to congratulate us.’”

“Since we just moved in, we didn’t know any of our neighbors,” Rob added. “They all know us now, even if we still don’t know them yet.”

The couple, who have dated for three years and have been engaged since Valentine’s Day, plans to reprise their wedding and reception June 26 at Hunter Valley Farms. “We are really looking forward to experiencing this with our friends,” Ashley said. “I’m the only person who will get to marry the same man twice.”