Asian carp, a menace to fish/humans, could be near Ft. Loudoun Lake soon 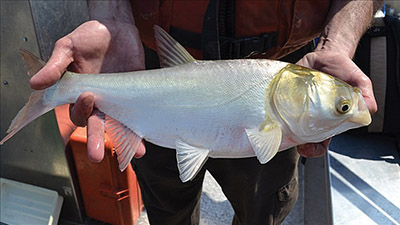 Asian carp are posing a threat in Tennessee’s waters, but so far the carp have not been observed in upper Tennessee River reservoirs, including Fort Loudoun Lake, according to Tennessee Wildlife Resources Agency.

“These fish were brought to the United States primarily to help maintain aquaculture ponds,” he said. “Unfortunately, they were able to escape those ponds into the Mississippi River during floods. They have since spread to some Tennessee waters through navigation locks.

“Silver carp and bighead carp are primary concerns for TWRA,” Harty added. “Black carp are also a concern, but only a few individuals have been found, and all on the lower reservoirs (Kentucky and Barkley lakes).”

However, he warned Asian carp “enter the Tennessee and Cumberland rivers from the Ohio River, traveling through navigation locks into our downstream reservoirs.

“Silver carp feed on microscopic plankton, not other fish,” Harty added. “When carp are present in high numbers, they can compete for this food with our native sport fish that also rely on plankton. ...”

As for size, “Silver carp can exceed 60 pounds, but typically don’t jump once they are over 10 to 15 pounds,” he said. On the other hand, he warned bighead carp could grow in excess of 100 pounds.

“Our fisheries ... have not observed any impacts outside of historical ranges, though it is likely that the presence of carp in large numbers impacts the behavior of our native species,” Harty said.

In the upper Tennessee River reservoirs, “We have received few reports from the public,” he said. “We are working to stop the progression of these fish into East Tennessee and will continue to monitor for their presence.”

“... Because these fish are invasive, we encourage people to harvest as many as they can. Remember, though, it is illegal to possess or transport live Asian carp,” he added. “We are providing incentives to commercial fishers to reduce the population in our downstream reservoirs, like Kentucky Lake and Barkley Lake, he said.

“... We are working to prioritize and implement barriers at navigation locks,” Harty added.

Learn more and report any sightings as described on TWRA’s website, https://www.tn.gov/content/tn/twra/wildlife/fish/asian-carp.html.