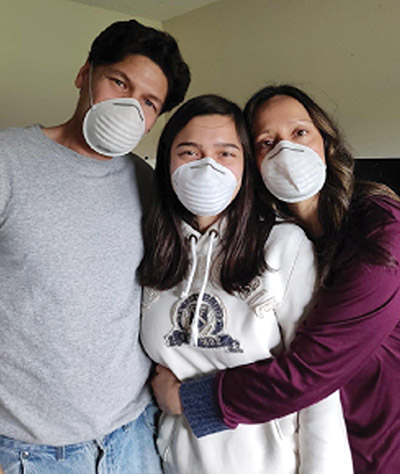 Farragut High School Class of 2019 graduate Giuliana Castillo, 18, was taking a trip of a lifetime to Italy as a Rotary Club of Farragut ambassador for District 6780 when it was cut short because of the coronavirus.

While her return date originally was July 2020, Castillo arrived home March 22. Once home, Castillo, daughter of Theresa and Derick Castillo, went into a five-day quarantine.

“At this time I am still upset by the whole thing and am not fully ready to talk about it,” she said. However, she reported her trip home experience in a monthly report to RCF which she shared with farragutpress.

Castillo departed from Tennessee Sept. 4, 2019, arriving in Italy the next day.

“I was in a town called Manta, in the province of Cuneo, which is part of the Piedmont region,” she stated in an e-mail. “With Rotary Youth Exchange, you list your top 10 countries then Rotary decides where to send you.”

Word spread of the coronavirus in February.

“At first we were not worried at all,” Castillo recalled. “Then everything started changing the last week of February, as the situation deteriorated very quickly.

“Monday, March 9. I woke up feeling good, then everything took a nosedive,” she stated in her Rotary report. While Castillo’s host family asked her to stay home, they also e-mailed her father, suggesting she return to the United States.

“The situation had deteriorated so much that, for the remainder of my exchange, it would not return to normal,” she added. “My mental health was struggling with each passing day.

“We told It’s Your World Travel I would take the flight for Thursday. I cried during dinner with my host dad.”

Then “that evening came the news: All of Italy is going on quarantine,” Castillo stated in the report. “I scrambled to get all the documentation necessary for us to get to the airport, everything citing my travel was essential, only to learn my flight was cancelled.”

A March 14 flight was cancelled as well. She rebooked another flight on March 21.

“At this point, it just felt like torture,” Castillo stated in her report.

Although Castillo made her flight to Rome, “I feared we would be in the middle of the Atlantic, and the government would send us back to Rome.”

She got on the plane for New York, which was delayed, causing her to miss her connecting flight to Knoxville.

“So, I got the flight changed back (from Atlanta) to Nashville,” Castillo stated. “The quick, 30-minute flight was very, very bumpy, and the thought crossed my mind, ‘I swear if this plane crashes, I’m killing someone.’”

“In the evening when I woke up from my nap, I had a fever (on March 23),” Castillo stated.

She remained under quarantine until she was tested by the health department and told “everything was normal.”

“I found Italy a beautiful country with an amazing way of living,” she added. “I met a lot of amazing people, but the people I found I connected the most with were the other exchange students and my best friend, who lives in Italy but is originally from Brazil.”

In addition, “My host family was absolutely amazing.”

Castillo attended high school and a linguistic school in Saluzzo.

“I felt free and independent and like I could do anything,” she said. “It was very empowering, and I can try to live like that, but it’s not the same with home responsibilities.”

In Italy, Castillo also had an opportunity to visit Turin, Rome, Milan and Genoa.

“The scenery in everyday life was incredible, and the culture was one I found to be very different in subtle ways from America but also very comforting because of the familiarity,” she said.

Castillo’s current plans are to attend University of Tennessee, Knoxville, in the fall, studying economics and global studies.

“They were the Belardi family, and I cannot describe in words what they did for me. They took me into their home and made me feel at home in a foreign country.