Despite pandemic, India one of Kate’s ‘best experiences’ 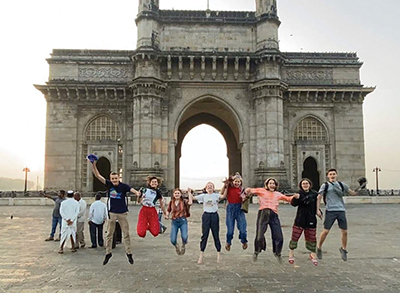 Despite the lockdown in India, District 6780 Rotary Youth Exchange student Kate Dansereau, a Webb School of Knoxville Class of 2019 International Baccalaureate graduate still trying to return home from that country after nine months, advises people to take the opportunity to travel abroad.

“Despite the coronavirus, this is one of the best experiences of my life,” Dansereau stated by e-mail. “A year abroad is not a trip, but a lifetime experience. I am so fortunate to have had the opportunity and have learned so much, not only about the culture around me but also about myself.

“I would also suggest looking beyond Europe when studying abroad. Europe is an incredible place, but the experiences you make in places that are truly foreign to you are definitely worth the experience,” she added.

The daughter of Rob and Christa Dansereau of Knoxville, Dansereau arrived in India July 27, 2019.

“Along with my arrival came monsoon season and the harsh rains,” she stated.

About the pandemic, “As someone who has been on quarantine for over a month and will be quarantined for two weeks after returning home, I understand it’s difficult,” the Webb graduate stated.

Dansereau is living in Maharashtra in Central India, where she has been living with two host families during her stay: the Nadius, who are Hindu, and the Akolawalas, who are Muslim.

“The city I live in is called Nagpur and is home to nearly 4 million people,” she stated. “Yet, in India terms, it is considered a small city or large village. Nagpur is known for its drastic temperatures and is considered the ‘Orange City’ and ‘Tiger Capital of India.’”

While in India, Dansereau attends Hislop Junior College as an 11th-year humanities student.

She plans to study at the University of Alabama through the Blount Scholars Program, majoring in public health and minoring in German.

Before the pandemic, Dansereau had the opportunity to travel across South India, visiting such places as Mumbai, the Allepey Backwaters, Goa and Thekaddy, the tip of India.

“Living in India was a big adjustment at first,” Dansereau stated. “In the beginning, I really struggled and did not enjoy living in India. Small practices, such as eating without utensils, using Indian toilets and learning conversational Hindu were big tasks; but after nine months, India has become my second home.

“Here, I often spent my time going out with friends to the markets — ‘bazaars’ — going out to coffee or practicing Kathak, an ancient Indian dance form,” she added.

As for COVID-19, “We had a few cases at the beginning of January, but people infected were quarantined quickly and life continued per usual,” Dansereau stated. “However, in March, we went on one of the harshest lockdowns in the world.

“This ‘Curfew’ first made it illegal to leave the house at certain times unless there was an emergency. A few days later ... people living here were not to leave their homes unless they were in dire need until the end of March. This was extended until April 15, and now to May 3.”

Resulting problems include “people starving in their homes,” she stated. “Until the extension on the 15th, I was very hopeful about my situation here, but with this change and the U.S. calling for an end of chartered embassy flights, I am a bit fearful that I will be stuck here for an extended period of time.

“I completely understand why the nation is under lockdown, but regardless, it can be a bit scary to be away from home during this pandemic.”

Dansereau is trying to return home through the U.S. Embassy. “The United States Embassy has said that there might be more flights this month; but in order to leave, I must get governmental permission to take a taxi from my city to Mumbai which is about 500 miles away or 14 hours,” she stated.

“If one of these flights is not arranged, I will most likely be stuck here indefinitely.”