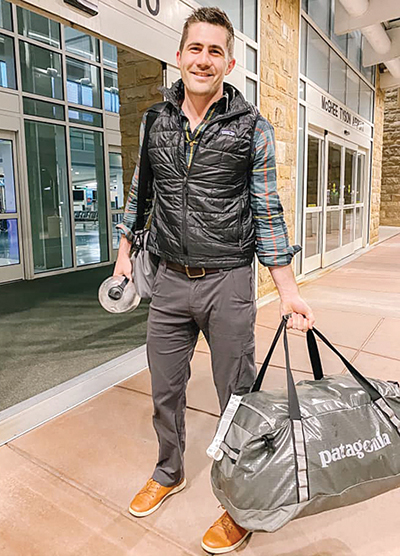 Andrew Randazzo, executive director of Prime Medical Training (11020 Kingston Pike in Farragut) and a paramedic, joined the thousands on the front lines in New York City as part of a leadership team overseeing one of several hotels housing 1,000 nurses and about 15 support staff.

“It’s been a great experience,” he said.

“We’re encouraged,” John added. “I think (Andrew’s) really making a difference. We’re people of faith so we know that God has (Andrew) protected; we pray for him daily,” he added.

“As a mother, I’m very proud of him, but I’m worried,” Judy Randazzo said about her son, who grew up in Farragut.

A paramedic since 2010, Andrew founded Prime Medical Training in 2013.

“He’s helping. I pray for him every day — that little hedge of protection around him,” his mother said. “That’s how we raised our children, to step up and do what you’re called to do in whatever situation.

In New York, “I understand Andrew is facilitating human resources,” John said. “He quickly found his spot. He’s in charge of staffing hospitals and medical facilities with people who come from out of town to New York to replace or relieve the local medical personnel.”

In Andrew’s career, he is recruited to different locations. He just returned from San Diego, where he worked with cruise ship passengers who needed to be quarantined.

He returned home for a weekend, then got called to New York.

“He got there a week ago,” John said last week.

“There are a handful of staffing agencies during the COVID crisis,” Andrew said. “It’s a small world in this industry.

“I was expecting a call from someone within 72 hours after arriving home from San Diego,” he added. “Sure enough, I got a call from a company called Krucial Staffing. I knew who they were but was not expecting to hear from them.

”They said I landed on their ‘short list’ of people to call. The phone call lasted less than five minutes. They told me what hotel to show up at and that I needed to be on a plane in the morning.”

From the first day he got there, “I hit the ground running and was up for 43 hours straight,” he recalled. “The next couple days, I wouldn’t take my first bite of food until about 7 p.m. Things have since calmed down, but I’m still working 16 to 20 hours per day.”

While in New York, Andrew said he has faced a lot of challenges.

“The nature of the work we’re doing, and the sheer number of people that came together in a short amount of time, were compounded on normal operational challenges.

“The medical facilities are where you see and hear of the horror stories,” Andrew added. “The trauma and pain that our nurses express from what they’ve witnessed on shift is unbelievable.

“People are dying hourly, and there are no exceptions. Young, old, healthy or sick, they are all falling victim to the virus.”

However, “On the flip side, as much fear and trauma as I’ve seen, I’ve seen an equal amount of love and support from peers and others around the country,” he said.

“It’s been overwhelming to watch as celebrities engage with our group.”

To support their efforts, e-mail ssloyer@krucialstaffing.com

“We receive 3,000 to 4,000 packages daily, and other forms of donations are incredible. There are so many other acts of kindness that happen.

“Several people in our group have talked about this on multiple occasions,” he said. “There are so many things reminiscent of what we’ve seen and read about from 9/11 and World War II.

“Every person is doing their part to contribute to the cause and help in the fight. It’s a beautiful thing to witness.”

But, “Anecdotally, it feels like we are staying just as busy,” he said. “In fact, we’re receiving about 500 more nurses this weekend.”

To get through the experience, Randazzo said his past decade as a paramedic has “taught me how to cope with sleep deprivation, high stress levels and trauma.

“Though I’m not directly dealing with COVID victims, I am supporting the nurses who are,” he said. “They come back from shift looking like the life was sucked out of them.

“So I use my crisis management experience to spend time listening to them, supporting them and encouraging them as they have to head back out to the war zone the next day,” Randazzo said. “Most of these nurses are not accustomed to these kind of environments, and so I get to the opportunity to help reframe their mindset and prepare them for the challenges to come.”

Like Andrew, younger brother, Jonathan Randazzzo, also has stepped up, as he is in the Air National Guard at McGhee-Tyson Airport and “has his name on the list, waiting for the call,” John said.