Coronavirus: ‘I think it’s going to play out,’ not expecting quick vaccine: Burchett at RM Fire #41 B 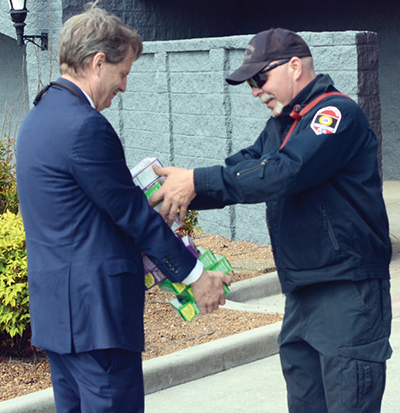 With local Girls Scouts being among those “in a little bit of a bind” due to COVID-19 concerns, U.S. Rep. Tim Burchett (R-2nd District) stepped up and bought $1,000 worth of their cookies, then distributed them to seven first responder locations in his district.

By May 31, “I hope we’re back — that this is just a distant memory,” Burchett said, adding he thinks “it is” possible.

However, Burchett said he is not confident a vaccine will be found anytime soon to combat the coronavirus.

“We haven’t hit the flu right in the last few years, so I don’t have a lot of faith in that,” he said. “I think it’s going to play out like (a virus) normally does. A cold sore is a virus, and there’s not a cure for that.”

Burchett said giving out his cell phone number in order to help people in desperate situations, especially those contemplating suicide, has been “very successful” since he first publicized his number to encourage calls Monday, March 30.

“People close to committing suicide, we’ve been able to refer them to help or have the law enforcement in their community come in and check on them,” he added.

Specifically, “I had a lady call me that was upset, wasn’t sure she was going to be able to make it, we just talked a little bit,” Burchett said. “I asked her about going outside; I said, ‘just don’t go near anybody,’ and she did.

“She texted me back in about 30 minutes (saying) she was doing fine,” he added. “I’ve since heard from her and she’s doing great.

“I’ve had a lot of calls just like that.”

Beyond suicide, “Parents unsure about their kids’ school year, people who couldn’t get their loans through the banks, veterans issues, disability — just everything,” Burchett said about other problems he’s addressed.

“… I wish more people would do this,” he added.

“The 2nd District is strong. … Their faith, I think, is what’s carrying them through all of this,” he said, but added, “They’re a little shaken, they sure are.”

He also mentioned the government “roadblocks and delays and bureaucracy to get them their funding. They’re a little ticked off about that, and disgusted — and frankly I am, too. … We just need to fund the poor people that are out of work and the small businesses.”

Looking internationally, “I think we better realize who put us in this position — it’s China,” Burchett said. “… I hope we take a long, hard look at our trade agreements with China and we start getting back to producing things in this country: pharmaceuticals, textiles, everything on down the list; furniture, food.

“We just need to cut them off; we don’t need to be doing business with them anymore.”

“Cynthia Moxley (CEO of Moxley Carmichael) said something to me about it, to see if I could help them out,” Burchett said about helping the local Girl Scouts. “I bought $1,000 worth (of cookies), and we’ve just been taking them around to first responders in the 2nd District. We’re very proud of the work (first responders) do.

“They rush in when the rest of us rush out.”