SJN Catholic School contributes to ‘something bigger than us’ 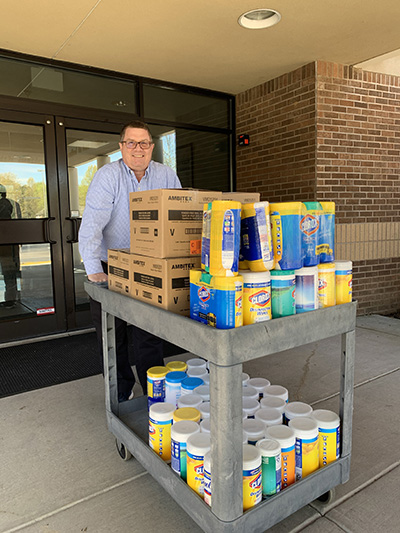 When Mary Marlowe, SJN Catholic School director of admissions, received an e-mail from a parent that the city was accepting personal protective equipment, she and principal Bill Derbyshire collected items and donated them to the city Saturday, April 4.

“We were able to give 76 containers of wipes and five boxes of gloves, and there are a thousand gloves in each box,” she said. “I think it was great (to donate).

“As a parent at the school, it made me feel like I was helping in some way, and I felt really good about it,” Marlowe added.

After posting the donation on SJN’s Facebook page, “We got a lot of traffic from our parent community that was very proud that we did that,” she noted. “They were very grateful that we were able to do that.

“For people who aren’t in the healthcare field … it makes them feel like something they’re doing is helping, besides staying at home, which is a big step, too; but I feel like we helped contribute to something bigger than us.”

After Derbyshire collected the supplies, Marlowe came to the school at 625 St. John Court in Farragut, loaded them in her car and delivered them to Chilhowee Park.

“At the beginning of the school year, the teachers sent out a supply list, and there’s always Clorox wipes on there,” Marlowe said. “(The parent) said, ‘I wonder if we have any extra Clorox wipes’ and if the school might be interested in donating them.

“(The parent) was sitting at home, thinking of ways we could help,” she added.

“I reached out to the principal, and he thought ‘that was a great idea.’ He went around to the different classrooms to see what their supply looked like.

“We had lots of wipes left over.”

While Derbyshire left a couple of the Clorox wipes in each of the classrooms — so classrooms would still have some whenever the school re-opened — he collected the surplus.

“Because we also have a preschool, they have to use gloves for when they are handling children’s food and things like that,” she said. “We had a lot of those as well.

“The same day that all of this happened, it was serendipity, I was watching the news and WBIR was doing a story on how the City of Knoxville had just set up the drop-off point at Chilhowee Park, and if you drop off there, then they will get it to first responders — fire departments, police stations and hospitals — when their supply gets low,” she added.

Starting the drive Friday, April 3, “We thought that would be a great place to give it, so it’s equally distributed across the city to wherever it’s needed,” Marlowe said.

According to the city’s website, “(Tennessee Emergency Management Agency) and the Knox County Health Department are working to supply hospitals, public health providers and TEMA/first responders with PPE,” she added.

For more information on the TEMA collection, visit http://bit.ly/330!10i. For updates, visit www.knoxvilletn.gov/COVID19.