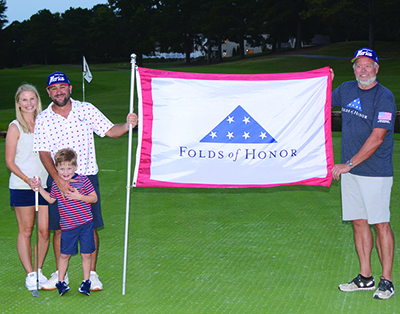 During almost 14 hours of practically non-stop golf, which added up to 225 holes (12-and-a-half rounds) for a fundraiser at Fox Den Country Club Monday, Sept. 14, Jake Reeves actually “ate a Chik-fil-A sandwich in about five minutes, that was the extent of the breaks.”

“It was too hot,” added Reeves, a former professional golfer for 15 years who played in the 2000 U.S. Open, whose friendship with fellow FDCC member Scot Benson led him to pull off this fundraiser to benefit Folds of Honor.

But the motivation to help this cause got him through.

“When you’re playing for such a good cause it’s not real tough,” Reeves said. “It’s for families of fallen officers in the military, raising scholarships for spouses and their kids.

“I don’t know how you could get any better, honestly,” he added. “It was a bigger success than I anticipated.”

About those last few holes played in almost complete darkness, “Luckily Jake hits the ball pretty straight, so we pretty much knew where to look,” Benson said. “Everybody had their phones out (using the light) to find the ball.”

“The last three we had carts with lights on out there,” said Reeves, a college All-American golfer at the University of Tennessee in 1994 who, as director of instruction at FDCC for about 18 months, is a two-time Tennessee Golf “Teacher of the Year” honoree.

On hand down the stretch were Jake’s wife, Ellen Reeves, and the oldest of two sons, Landry, 5.

Among five other FDCC members and friends of Jake’s also on hand to support him Monday evening was Ryan Ott, FDCC general manager.

“They’re getting ball yardages and fixing ball marks. They were super supportive,” Reeves said. “Scot was with me every single hole outside of about three or four.”

“Jake has been so supportive, I wanted to be out there supporting him,” he added. “He’s actually my teacher (at FDCC).”

As opposed to actually trying to play good golf, “Most of it was speed,” this Americas, Georgia, native said about wanting to raise as much money as possible.

However, “I ended up making a lot of birdies, but not keeping score, I wouldn’t know how many,” he added. “I probably made five or six birdies per 18 holes.”

Overall, “It was awesome. ... All the members at Fox Den were way supportive of it.”

As for how it first came to be, “Scot “had this idea” for a marathon golf fundraiser given “there have been some people doing it throughout the state of Tennessee,” he said.

Moreover, “You meet the people and you talk to them and you see where the money goes,” Reeves added. “There’s not a better cause out there that I can see.

“We had anywhere from $1,500 pledges to $50 pledges. And then you could pledge an amount per hole. Most people did a dollar per hole.”

Nationwide, “These golf marathons have become important fundraisers for Folds of Honor, especially with COVID rght now,” Benson said. “We’ve done nine in Tennessee this year. This state was the (nation’s) sixth largest recipient last year, over $1.2 million in scholarships.”