On to substate for Madden’s Lady Ads after beating HHS in 3-AAA, O-Ridge in region 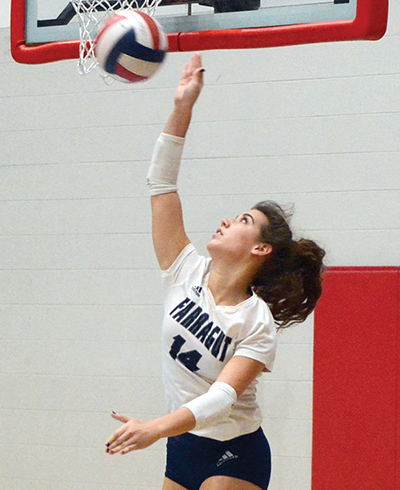 MARYVILLE — Surviving season-ending elimination at the District 3-AAA level thanks to three close-game victories at Heritage against the Lady Mountaineers (all 25-22), Farragut’s next season-on-the-line game came against a “Pink Out” rival Monday night, Oct. 12, at Maryville High School.

With its annual regular-season match versus Oak Ridge a “Pink Out” Breast Cancer Awareness cause, this Region 2-AAA semifinal showdown versus the Lady Wildcats, District 2-AAA tourney champs, started rough for the Lady Ads — but ended with a dominant performance.

In fact, using the tips — a finesse shot at the net to catch the opponent off guard, thinking the shot likely would be a hard-hit kill attempt — “we got Oak Ridge quite a bit on those,” the Lady Admirals skipper added. “... I said, ‘You’ve got to out-smart them. Look at what’s open and just go for the easy points.”

The win puts FHS in the substate — one match victory from the Class AAA State Tournament in Murfreesboro starting next week.

“The girls were on a mission. They decided they wanted the opportunity to try to go to state this year,” Madden said.

However, after losing the first game, “I brought everybody together and we just basically talked about what we weren’t doing on the floor — and the key thing they said was, ‘We weren’t talking.’”

Individually versus Oak Ridge, “Our libero played excellent, Ira Au,” Madden said about the senior. “She had 24 digs.”

Freshman Kennedy Holley, right-side hitter who Madden said “was the glue when we beat Oak Ridge (in the regular season),” had 15 kills against the Lady Wildcats Monday.

“They couldn’t figure how to stop her then, and they had trouble with her tonight because she’s a lefty,” the FHS coach added. “She was on fire. She was unstoppable.”

“We had good play for Kate Priest,” Madden said about the FHS senior outside hitter who added six kills.

Finishing the regular season as the No. 3 seed in District 3-AAA behind league and district tourney champ Maryville and league runner-up Heritage, Madden’s girls took a 15-9 overall record into the Region 2-AAA title game Tuesday evening, Oct. 13 (after deadline) against the homestanding MHS Lady Red Rebels.

With a 3-0 match record against Farragut during the regular season and 3-AAA tourney, Maryville was the heavy favorite to host the Region 1-AAA runner-up during substate action tonight (Thursday, Oct. 15).

A loss versus the Lady Red Rebels would send Farragut to the Tri-Cities to play the Region 1-AAA champ, either Kingsport Dobyns-Bennett or Johnson City Science Hill. If the Lady Ads pulled the region title game upset Oct. 13, FHS would host the Region 1-AAA runner-up tonight.