Fleenors travel to D.C. for Prayer March, find ‘peace in the city’ 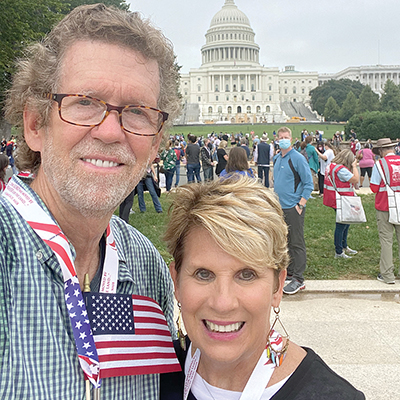 Farragut couple Mike and Susan Fleenor recently joined thousands of Christians in the nation’s capital with the singular goal of praying for America.

“Our nation is in trouble and we need God’s help,” explained Susan, who had seen the March advertised and asked her husband to attend.

“We just wanted to be part of that, to pray for our nation,” Mike said.

“It was something we could do, and prayer changes things,” Susan added.

“We weren’t afraid, but we did have two concerns in attending,” Mike said. “One was the possibility of COVID-19, and the other was all the rioting and demonstrations that have been going on.”

“But all we found was peace in the city — peace over the city — when we got there,” Susan said. “Nobody was on the streets but Christians.”

Their first night in Washington, Susan felt a desire to visit the Supreme Court building and urged her husband and the Lamberts to accompany her. Despite a lengthy walk and a downpour of rain, “I just felt like we needed to go there,” she explained.

When they arrived, they encountered a well-known Messianic Jew, Frank Amedia, who was leading prayer in front of the Supreme Court building.

“We just stood there, mesmerized,” Susan recalled. “It was completely God-directed. Everyone was praying and we were able to join them, hold hands and pray with them.”

It was just a foretaste of the next day’s events, which began in front of the Lincoln Memorial, with estimates of more than 50,000 Christians kicking off the march. Participants were given a card, laying out the stops along the Mall and topics for prayer.

“Franklin Graham spoke to all of us and said, ‘My prayers are just like your prayers, they are no different. And this is not about me, but it is about God being glorified,’” Susan said.

From the Lincoln Memorial, onward down the National Mall, participants were asked to stop seven prayer stations — the World War II Memorial, the Washington Monument, the White House, the National Museum of African American History and Culture, the National Archives, and finally, the U.S. Capitol — and pray for specific needs outlined on an event lanyard.

“It was just amazing,” Susan said. “We were blessed beyond measure. .. I really think heaven will be just like that — the joy and the praying and the lack of fear. It was all about God and giving him the glory.”

The Fleenors, who have two grown children, Mark, who was a missionary pilot and now lives in Alaska, and Rebecca, who has just started her OB/GYN residency in Alabama, are no strangers to helping spreading the Gospel. Both are very active long time members at Christ Covenant, with Mike serving on the Session and Susan, who previously worked in the church’s Children’s Ministry, leading Bible studies. Both also serve on the Board of Directors for Christian Embassy in Washington DC, a division of Campus Crusade for Christ, which provides Bible studies and evangelism outreach opportunities for people who work with members Congress, as well as international ambassadors and their spouses and families.

“It is one way to support our nation,” said Susan.

Mike said during the pandemic, “Zoom has actually helped expand that ministry, taking it all over the world.”