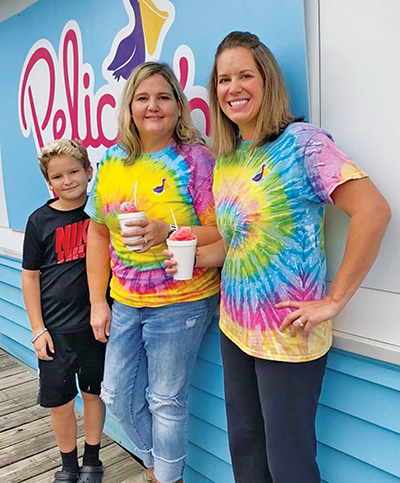 Sugarwood subdivision neighbors and best friends Tanya Morrison and Nikki Sprow recently partnered in a Bearden venture to bring the community together.

After buying the Knoxville franchise for Pelican’s SnoBalls, Morrison teamed up with Sprow to open the business at 5900 Kingston Pike across from Food City.

“It’s so exciting to see smiles on kids’ faces again, finally, and the families posting on Facebook how much they love it and how much they appreciate that kind of service,” Morrison said.

“The syrups are all pure, and the dyes don’t stain clothes,” Morrison said. “They don’t have allergens or glutens. We even have Kosher syrups.”

Although it has nine signature favorites, Pelican’s SnoBalls serves more than 100 flavors, she said.

However, “It’s more than just ice and sugar,” Sprow said. “It’s going to be like our ministry, too.

“We want it to be a fun, safe place for kids and families and really be known in the community as ‘this is where you can go.’”

”It’s a Christian-based company,” Morrison added. “We want it to be more of a ministry for people to come … after church and get together and fellowship. We are open on Sundays only because it’s part of the ministry.”

They took over the business from the previous owner on Sept. 25, starting with a soft opening. As Pelican’s SnoBalls is seasonal, they will close Oct. 31, but Morrison said they are planning a grand opening on the first Saturday in March, when the season begins again.

“This was our driveway vision during the pandemic,” Morrison said about the business.

Sprow remembered that vision came about while she and Morrison were sitting in the driveway one day, as they have many times before, thinking about the community and families affected by the pandemic.

“Obviously we were in the middle of that,” she said. “We’re like, ‘Kids need something to do,’ and (Morrison) took me to Pelican’s for the first time.”

“We were just desperate to try to find something for the kids to do to be excited about,” Morrison said. “Everybody was just so down, and we sat in the driveway together almost every day, just talking and praying.

“We just wanted something to bring the community together, so I said, ‘Let’s go get a SnoBall,’” she added.

“We packed up all the kids in the car and went to Pelican’s, which was 25 minutes away. I told (her the drive) would be worth it. The kids loved it.”

Days later, they again met in the driveway, talking about Pelican’s and how fun it was.

“We went back a few weeks later, it said ‘Business for sale,’” she said. “Our brains were about to explode.”

But they got an epiphany.

“We decided, ‘What if that was something we could do, and bring the community together and bring families back together?’” Morrison said.

Still, she added, “I wouldn’t have bought (the business) without (Sprow).”

Then, the business “just fell into our laps,” Morrison said. “Everything went absolutely perfect.”

The business currently is open from 1 to 7 p.m., Monday through Thursday, and from 1 to 8 pm., Friday through Sunday, but Morrison noted hours are expected to change in March.