Smoak honored as City Manager of the Year 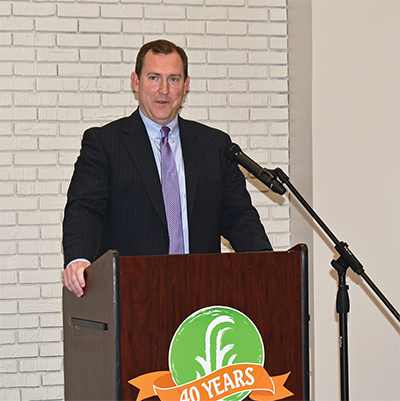 Many may have already thought it, but as of Nov. 4, it was official: Farragut Town Administrator David Smoak has been named 2020 City Manager of the Year.

He learned of the honor — bestowed by the Tennessee City Management Association in Franklin on Wednesday — in a surprise Town meeting Monday, Nov. 2, in Farragut Community Center.

Smoak, who has been Farragut’s Town Administrator since 2010, also received a proclamation from Town Mayor Ron Williams, declaring Nov. 2 as “David Smoak Day” in Farragut for receiving the award.

Williams had nominated Smoak for the honor earlier this year.

“I’ve been around a lot of [city managers], and if you look at 10 years of service, and what he has done, it’s pretty amazing,” Williams said.

Town Assistant to the Town Administrator Trevor Hobbs had written up Smoak’s nomination, detailing his accomplishments, and those that have taken place under his leadership, including helping procure more than $40 million in federal and state grant funding; initiating a number of new programs, including the Intro to Farragut Class; helping oversee substantial growth in Farragut’s parks and recreational opportunities; and maintaining the Town’s pristine fiscal stewardship, which has long been a hallmark for Farragut.

“The Town remains debt-free and has received the Government Finance Officers Association Award for Excellence in Financial management every year, as well as the Distinguished Budget Presentation Award each year since 2014,” wrote Hobbs.

Additionally, Smoak has served in several capacities with the TCMA.

“I certainly couldn’t be in this position today without the tremendous staff, who make my job a whole lot easier,” said Smoak Monday after the presentation, which was attended by staff, Williams, Alderman Drew Burnette and Smoak’s wife, Sonya, and their children, Evan and Olivia.

“I couldn’t be in this role, and do the job I do, each and every day, without all of you, and I have told the Board numerous times — you are our biggest asset.”

He said he also wanted to thank his family and friends.

“Having a great support system in this job has been a tremendous thing. I also certainly want to thank my peers,” Smoak continued. “I am humbled by this. There are a lot of great city managers, across the state who deserve this honor, but I appreciate it, and thank you guys for all you do.

“I really appreciate you.”