A ‘Biddle’ bit of Center detail 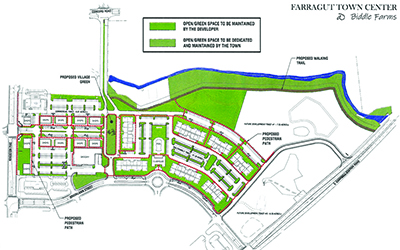 Developer Budd Cullom with CHM LLC, presented a submittal package associated with the Zoning Map and future Land Use Map amendments he is requesting for the expansive 40-acre-plus project, which would be located on the “old” Kroger site, and extend down Brooklawn Road to South Campbell Station Road.

His plans include an anchor store and as many as 10 small retail/commercial buildings that would be located directly across the street from Farragut High School. The back portion of the development would offer multi-family housing — between 200 and 300 upscale multi-family housing units, which would be split by a “great lawn” multi-purpose area and also include walking trails and other amenities shared with the Town.

A concept plan for the development has been approved by Farragut Municipal Planning Commission, which will be considering the latest additional documents and amendments at its upcoming Thursday, Nov. 19, meeting.

“We are working with the applicant on what they want and how to word that, and it would be up to the Planning Commission and the Board of Mayor and Aldermen if they are comfortable amending the text,” said Mark Shipley, Town Community Development director.

As for scope, “It is a big project with lot of moving parts — there are lot of things to think about and talk about,” Shipley said. “We had asked the applicant to gather more information to provide a more complete submittal. (Cullom) is requesting the property be zoned as a Planned Commercial Development.

“What you have before you is more or less the same concept conditionally approved by the Planning Commission in July,” he added. “It also includes a conceptual grading plan … (along with) lighting, signage and more details of building elevations for the proposed four-story apartments.

“One of things we asked was that (he) make sure building renderings will more closely reflect the layout on concept plan. Now, it shows them being connected and is something (resembling) more closely what will be built.”

Shipley noted Cullom also has done “a substantial amount of work already on the property and development, and is working with FEMA” on potential issues and updates.

In a separate interview Monday, Nov. 9, Cullom said his company “has performed extensive and complete hydrology studies, not only for the site but including a larger area, to make sure there will be no drainage or flooding problems.”

On the connector road to Concord Road, for example, Cullom said plans call for a new bridge to be constructed over Turkey Creek, vastly improving drainage issues.

“The upshot of that study is that (we) will be able to meet Town ordinances and will perform and pay the fee to do a FEMA map revision that will bring the whole area more current,” he added.

Post development, the drainage would only be improved by the proposal, Cullom said.

In addition to revealing proposed apartment appearances, Cullom and architect Don Kendall discussed a design for the Main Street entrance-way off Kingston Pike.

“This is what the applicant is proposing at the entrance of Kingston Pike,” Shipley said of a three-story monument-style design featuring a clock tower. “They talked about having an iconic element at the entrance.”

“I would like to get everyone’s take on it,” Cullom said. “We were pretty excited about it. There would be towers on either side, as you are entering Main Street.”

The impact of the proposed development on traffic has been criticized exponentially in Town meetings and on social media, but Cullom’s own recently-completed study revealed “it would not be a significant impact,” Town engineer Darryl Smith said.

“The biggest problem we have is background traffic alone, but (the study) didn’t show it would make it that much worse,” he added.

“If the property was to be developed as originally zoned as commercial, it would have more big box retail,” Cullom added. “Potential traffic could be as much as 33 percent greater than the development we were proposing.”

“That was my biggest takeaway, that the development — with the uses we are looking at here compared to how already zoned as pure commercial — have significantly fewer trips than what commercial would have,” Smith said.

Additionally, “I think the traffic study is pretty clear — our development (would not be) creating problems on Concord Road,” Cullom added, addressing some concerns voiced by Concord Hills residents.

Meeting was held virtually and broadcast live on Charter channel 193 and TDS channel 3, and may be accessed via the Town’s You Tube Channel.