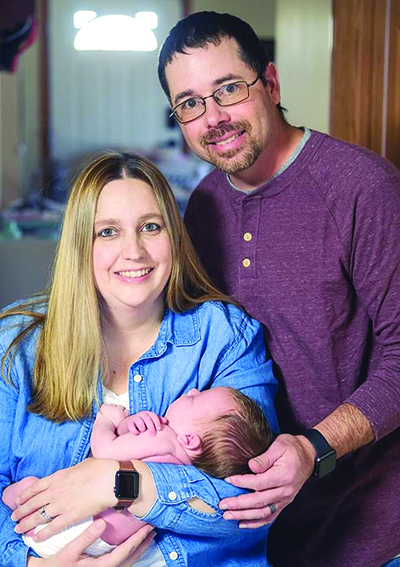 Farragut’s own National Embryo Donation Center has become the first embryo adoption program in the world to reach the milestone of 1,000 births.

When Emmie Sue Brookhart, “adopted” as a frozen embryo, was born healthy Sunday, Oct. 18, in Davenport, Iowa, to parents Josh and Ashley Brookhart, she became the 1,000 birth facilitated through NEDC.

“I am just so happy to have been part of Josh and Ashley’s journey,” said Gordon, who joined the practice in 2019, partnering with Dr. Jeffrey Keenan, NEDC president and medical director. “Every single one of those 1,000 babies has their own unique story, and these successes are a result of the amazing team effort put forth by the NEDC.

“Embryo adoption is a fantastic option for many couples that struggle with the issues inherent in assisted reproduction. Since joining the team at Southeastern Fertility, I have an even greater appreciation for the outstanding work done by the NEDC to coordinate the embryo adoption process.”

“Starting and running the NEDC, in addition to an academic and clinical medical practice, has been a huge amount of work, but I would do it all over again without hesitation,” said Keenan, who brought Gordon on board to help with the SF workload. “I would have never predicted, 20 years ago, that the NEDC would turn into the largest, most experienced and most successful embryo adoption clinic in the world.

The NEDC opened in West Knoxville in 2003, forming as a direct result of a vision cast by Christian Medical & Dental Associations CEO Dr. David Stevens, who saw the need for a high-quality, scientifically and ethically sound way to honor the dignity of the human embryo.

Since then, the faith-based organization has gained distinction as a leading comprehensive non-profit embryo adoption program whose purpose is to protect the lives and dignity of frozen embryos that would not be used by their genetic parents and to help other couples build the families they have longed for via donated embryos.

Embryos have been donated to the NEDC from all 50 states, and couples have traveled to Knox County from all over the United States, as well as some foreign countries, for their embryo transfers.

It was for these very reasons that Gordon, a third-generation physician, agreed to partner with Keenan in 2019.

He said as his reproductive endocrinology career unfolded, “Moral dilemmas came up regarding fertilizing embryos and what to do with them afterward,” Gordon said. “It became hard to wrestle with,” especially as he learned there are currently more than one million frozen embryos with unknown futures.

“When my patients ended up with too many eggs, there was the situation left with what should be done with them,” he added. “Do you continue freezing them? Destroy them? That was a huge dilemma for me.”

Already praying about the situation, meeting Keenan helped Gordon see what his next professional step needed to be.

While Gordon readily admits, “I don’t like change. My daughter even said to me that I hate to even change toothpaste brands,” he, his wife, Allison, and Susannah — their youngest of four children — moved from the Washington, D.C., area to Farragut last year.