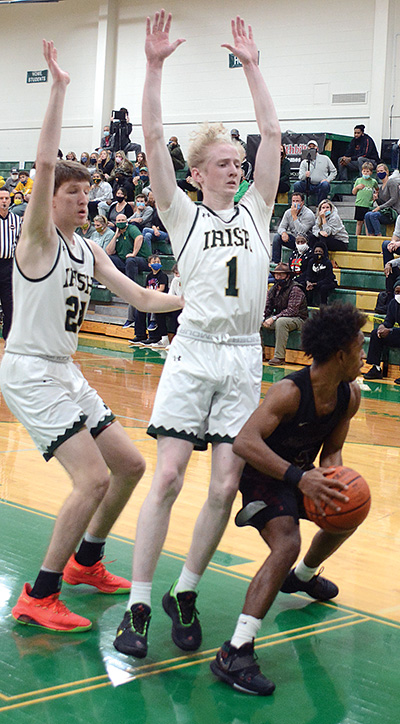 The Irish, who were slated to play in the championship game of the Sevier County Winterfest Shootout Classic Wednesday, Dec. 30, didn’t get the chance to win a championship because that contest was canceled.

“I feel fortunate that we’ve been able to play 10 games,” Catholic head coach Mike Hutchens said about an 8-2 record in 2020. “We had the Arby’s Classic canceled and we were hoping to get three or four games there.

“But we were able to get a couple of games here and that was important for us,” he added.

The Irish opened the Sevier County tournament with a 71-36 victory over the host Smoky Bears Dec. 28.

In that game, junior point guard B.J. Edwards returned to action after missing Catholic’s recent loss to Christ School (North Carolina) due to an ankle injury he sustained in the Irish’s home victory versus Bearden Thursday, Dec. 10.

“Having B.J. back was big for us,” Hutchens said, adding that despite Edwards’ injury in the Bearden game, he “played the rest of the game.

“He missed the Scott game and he missed our game against Christ School, and that was a wild game and a wild last play.”

The Irish lost to Christ School 65-64 in North Carolina, but they’ll get the chance to avenge that loss Friday, Jan. 8, when Christ School returns the favor, making a trip to Knoxville to visit KCHS.

Edwards led with 24 points and Cain had 21. Presley Patterson, junior guard, added 14 and Tamba finished with 12.