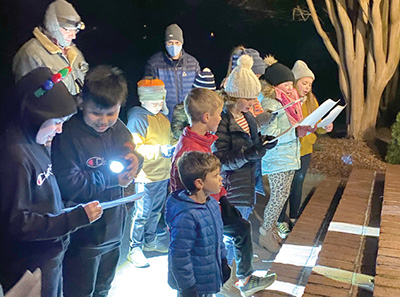 Steeplechase subdivision residents recently opened their doors to a joyful blast from the past.

“We had a group of neighborhood children go caroling in the neighborhood (off Union Road),” resident Cheryl Lewis said. “I thought, ‘that’s such a wonderful thing to do, especially during this season of COVID.’”

Seven families, which included 17 youngsters ranging from 1½ to 17 years old, traveled from home to home on golf carts and a pony Friday, Dec. 18, then sang every verse of several carols.

“The families of our neighborhood had put together a night of caroling,” said Ashley Priban, one of the organizers. “In spite of COVID adding a different dynamic to your typical Christmas celebration, with no Christmas parties to attend and limited family that you get to see, you can’t take homemade treats to share with friends. So we were looking for something.

“We felt like, for our children, it may turn selfish,” she added. “It’s turning into what gift might I be getting …”

“(Priban) told me she thought the children have been hearing so much on TV about doing all your online shopping early … and focusing on that sort of thing, and she said she thought it would just be nice for the children to focus on something else and doing something for somebody,” Lewis said.

“We wanted to make sure we were sending the message ‘Jesus is the reason we have to celebrate,’ so the families got together (online) … and decided to have a night where one of the moms (Leslie Lane) fixed a little hot chocolate stand,” Priban said.

The families who performed for neighbors included those of Jara and Ashley Priban, Josh and Leslie Lane, Barbara and Greg Kalosieh, Danielle and Joe Ray, Adam and Jennifer Lett and Yvonne and Nick Lawrence — with grandmother, Patricia Morrow.

“More people than we expected showed up, so it was wonderful,” Priban said. “The kids had a lot to do with planning it.

“One little girl, Nolla, who is 10, had written every single word of about eight Christmas carols,” she said, adding the group sang every verse of those carols.

“It was freezing,” Priban recalled and laughed. Still, neighbors stayed at their doors throughout the singing.

“It was a lot of fun. It’s something we talked about maybe making this a tradition,” she added.

For the youth, Priban said it was “almost like trick-or-treating.

“They were so excited at every single house,” she said. “They were wanting to run from house to house … they were so pumped.”

However, what most impressed Priban was the reaction of neighbors as they listened to the carolers.

“That was probably the most special, watching their faces light up,” she said. “Some got out their phones to record us.