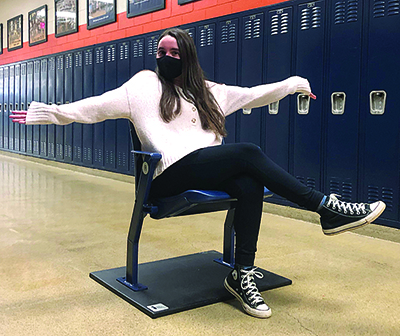 Knowing full well of the decades-long rivalry between Bearden and Farragut, all Farragut High School history teacher Angela Breeding had to do was mention a project in which the “other school” had taken part.

“That was all it took,” she added, smiling. “The senior class was completely on board with duplicating that idea.”

And that is exactly what 30 members of the Class of 2021 are hoping to do — oversee the replacement of 800 ground-floor seats in the Vickie B. Wells Auditorium during a fundraiser that officially will launch Friday, Jan. 15.

Bartlett, of course, is 100 percent behind the project, too, for more reasons than one — he was Bearden’s principal when BHS replaced its auditorium seating a few years ago.

He has also been very proactive in leading the charge to spruce up the schools’ campus since he was tapped to lead FHS at the beginning of the 2019-20 school year.

“One thing we have done is promote the idea of ownership,” Bartlett said. “This is the community’s school, and it is our job to make it the best we can make it.”

“Working on the auditorium seemed to be the next logical step,” said Breeding, who is leading the project among seven other faculty members who also are part of the Senior Committee.

The current seats are original from the building’s construction in the mid-1970s.

As they have aged and needed repairs, maintenance workers have had to use parts from the upper floor balcony seats because parts are no longer available.

Bartlett said it is hoped the 200 upper-floor seats would be replaceable, too, but right now the focus is ground floor.

“This is the community’s auditorium as much as it is the school’s,” said Breeding, noting church groups — and even the meetings leading to formation of the Town — have taken place there through the years.

Replacing each chair will require a $199 dollar commitment, which will cover not only the seat but also a small nameplate, if the donor chooses, to honor or memorialize an individual — or just list the donor.

Breeding said she is especially proud of the work the committee has put in during the project’s planning stages, with each student serving on specific subcommittees, as the plans have solidified.

“It has been really special to see them work so hard,” she added.

The fundraiser will be featured on the school’s Web page https://www.knoxschools.org/farraguths, where a link will appear starting Friday.

“This is such a special school, and such a special place to a lot of people,” Bartlett said. “This semester — this year — we want to be able to say, and to show, it has been successful — regardless of challenges.”