Evan memorialized by parents with scholarship 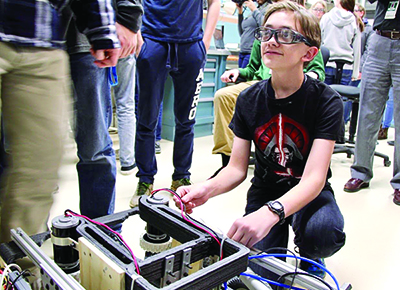 =A talented guitarist and artist, and a member of Hardin Valley Academy’s RoHawtics FIRST Robotics team, the late Evan Thomas Richey loved traveling, online gaming, comics and was referred to as “The Strongest Avenger” by those who knew him.

“He was always up for adventure and trying new food,” his mother, Tina Richey, said. “He loved traveling and riding horses. We rode horses in Monument Valley. We traveled to England, France, Costa Rica.”

During his junior year at HVA, in 2018, Evan was diagnosed with metastatic osteosarcoma. “He got chemo for a year,” Tina recalled. However, after a courageous battle, Evan died on May 17, 2019.

“He passed away just after he got his diploma,” she added. “Thirty of his friends came to the (East Tennessee) Children’s Hospital to see him on his last day.”

“We’re trying to keep Evan’s memory alive and to honor him,” she said. “We gave away the first two $2,000 scholarships last year, in April.

One scholarship went to a HVA senior.

“This year, we’re giving away three $2,000 scholarships,” Tina said. “We’re trying to reach as many students as we can.”

Students can get an application at www.evanricheymemorialscholarship.com/.

“A big part of (of the application process) is the students have to write an essay, telling how they have been affected by cancer — either the student personally or from a family member or friend,” Tina said.

At her workplace, University of Tennessee Graduate School of Medicine in the Amyloidosis and Cancer Theranostics Research Lab, she set up an unbiased committee to judge the essays and determine who will receive a scholarship.

She started raising money in spring 2020 by selling masks, which she made. To help raise funds, masks can be purchased at Four Seasons Vintage and Bearden Antique Mall in Knoxville. All proceeds benefit the scholarship. Donations also can be made at www.eanricheymemorialscholarship.com