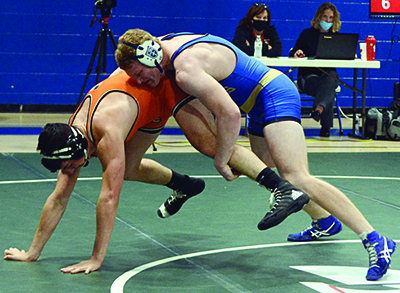 Losing for just the second time this season (19-2), Fogle “battled another Ethan from Pigeon Forge (Sutton, losing 7-6 in the championship match). They’ve gone back-and-forth all year long,” Dotson said. “Ethan (Fogle) had some good pins on his way to the finals.

“Parker Sapp (16-5) took a tough loss in the very last second of the (championship) match, losing 3-2 to Timothy Charpenter of Lakeway.”

“It’s exciting to see he’s actually able to compete and take third as a freshman,” Garabrandt said of Lyons.

About Enters, “It was actually pretty nice to see how he is outside of our practice room — his first competition in a big-style tournament,” the Admirals skipper said.