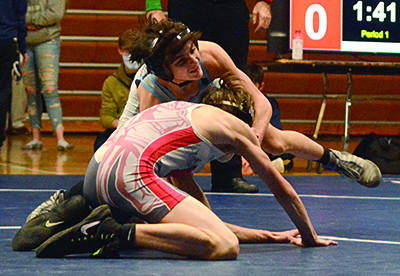 Though only the top two region finishers advance to the TSSAA Class AAA Boys Wrestling State Championship, which have been rescheduled for Friday, Feb. 26, three other area wrestlers also earned state berths: region runner-ups Connor Lyons of Farragut (126), only a freshman, and Bearden grapplers Jason Alvarez (152), a sophomore, and junior Aiden Duarte (182).

“Over the last couple of years, he’s had a personal trainer, gone to plenty of camps,” the coach added about Zach’s level of commitment.”

Though qualifying for state all four years, “He has yet to place at state,” David said. “I think getting in the top six would be an accomplishment there.”

About Lyons, “Although he lost his finals match (5-2 to Burns), it’s probably one of the better matches he’s wrestled,” coach Garabrandt said. “The kid he wrestled in the finals is a fantastic wrestler.

“I think (Lyons) can win a match or two at state,” he added. “If he wrestles like his potential, he could get on the podium (top six).”

Bearden head coach Donnie Floyd said Meade and Burns “wrestled exactly how I wanted them to. ... They did exactly what they needed to do to win. ... They’re peaking at the right time.”

Though Meade won three matches in the 2020 region “in just 29 seconds,” this year the senior’s efforts featured a pin and a 6-0 title match victory.

“I thought he wrestled better this year than he did last year,” Floyd said.

Bulldogs seniors Jack Hauke (160) and Carlos Osuna (220) were both less than two minutes from qualifying before heartbreaking losses.

A first-year wrestler, Webb “wrestled the best I’ve seen her all year,” the coach said. “She really impressed me — she was one of the ones who surprised me.”

In her third year of wrestling, Vail “was able to put all of her training into getting to state for the first time.”

Coach Garabrandt said Thibeault “broke a rib at regions,” and cannot compete at state. “... But she wrestled through that injury” to finish third and qualify.

Manning “is in her second year of wrestling,” Garabrandt said.

HVA’s one girls qualifier is freshman Ella Murphy, region champ at 190 — and unbeaten at 12-0. “She’s got a chance to win the state championship,” Giles said.

Bearden’s girls qualifier is Kiera Blevins (second in region at 150). Jordan Eikenberry (125) was unable to compete due to injury.