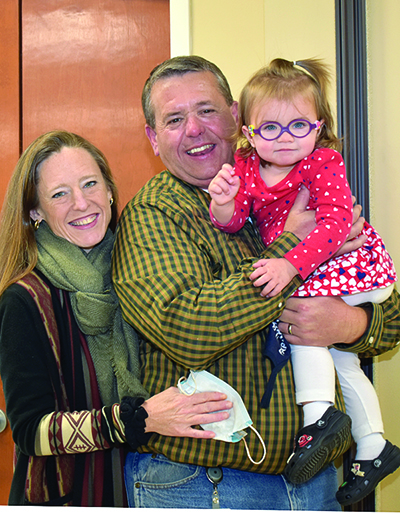 “It was just time,” said Brewer, who is leaving to work as a superintendent with Southern Site Inc., the grading company most recently working in Farragut on McFee Park and Ivey Farms. “There just comes a time in a man’s life when you know it’s time to move on.”

His service was celebrated with a reception Feb. 12 in Town Hall, complete with a red velvet cake and a chance to say goodbye to his co-workers.

“It’s his favorite,” she added while wiping away tears.

“We’re one family here, and I just don’t like it when people leave. I’m going to miss him.”

Brewer was touched by the gesture alongside his toddler granddaughter, Ophelia (nicknamed Opie), and wife, Ellyn.

The couple currently reside in Karns, where they are raising Opie, but previously lived in Farragut, where they raised their three sons.

Brewer, a Maynardville native, began working for Public Works director Bud McKelvey in 1990, fresh out of the U.S. Army.

“I was a soldier returning home, and the position in Public Works was available,” he said, noting that during those 18 years he became that department’s first foreman.

“My favorite memories involve the people that worked for me at the Public Works department, and those that I worked for after I came to the Engineering department,” Brewer added.

“The snowstorm in March of 1993 is another memory. We worked from Friday at 8 a.m. straight through until Saturday night at 8 p.m. Came back on Sunday at 6 a.m. and went home at 6 p.m. By Monday morning, all the streets in Farragut were clear.”

Overall, working for the Town “has been a great experience,” Brewer said. “The current and past administrations have been great, and I am only one of four who have worked for all five Town Mayors.

“It’s been lot of fun, I’ve made a lot of friends. We’ve had some heartbreak, too, but overall it’s been a great experience,” he added.

“The citizens of Farragut are some of the best people in the world to work for. It’s been an honor and a privilege.”