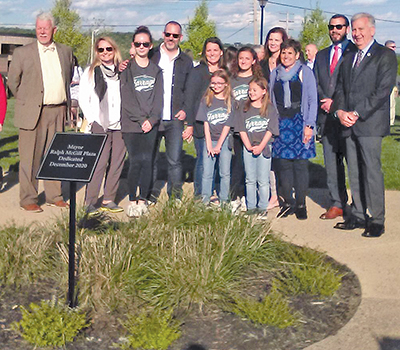 The plaza, located behind the restored Campbell Station Inn at the corner of Kingston Pike and North Campbell Station Road, was named for Dr. McGill, Farragut’s third mayor and a Town founder (Farragut Community Group) who wanted to save the Inn, previously known as Russell House, as the Russell family sold the property to the Town.

“This is, indeed, a dream come true,” said Marianne McGill, Ralph’s wife and fellow Town founder (FCG member) who was one of Farragut’s first elected officials, about the plaza. “Ralph and David and Jim Nixon (Farragut real estate broker/land partner) spoke and worked tirelessly trying to purchase this property so it wouldn’t be gone to waste … it’s turned out to be a beautiful place and also the Community Center … I just wish that he were here tonight.

“I just thank you for all you’ve done,” she added before breaking into tears. As the dedication plaque was unveiled, she again broke into tears. Before the unveiling, she and the crowd heard from her granddaughters, Shayleigh, Ellasyn and Emerson Pratt, who sang the late mayor’s favorite hymn, “Amazing Grace.”

“We would not be standing here today if it were not for the vision and perseverance of Mayor McGill,” current Farragut Mayor Ron Williams said. “My work with Ralph has been many years through the (Sugarwood), Homeowners Association projects all the way to the Campbell Station Inn vision.

“Usually we would arrive at church early, and I was able to sit with Ralph and talk about his vision for this particular piece of property and what he thought it could turn out to be, and we see it today,” Williams added. “This is a wonderful development that bears his name, and I think his family can be really proud that he had the forethought to get started with this.”

“It is truly an honor to be here,” Farragut Municipal Planning Commissioner Betty Dick said as her voice broke with emotion.

During the struggles of forming the town, she remembered, “Ralph received most of the harassment and criticism from the anti-incorporation crowd.”

Dick described Mayor McGill as a “very accomplished and compassionate person. He cared for people; he loved his family … he cared about where he lived.

“Without Ralph McGill, there would be no Farragut,” she added.

“He was everybody’s mayor,” Eric Johnson, yet another founder/FCG member, said of Mayor McGill.

Johnson, who also served on the first elected Board of Mayor and Aldermen and 10 years on the Town’s Board of Zoning Appeals, remembered questioning Dr. McGill’s leadership skills as fellow FCG members, but watched him become a strong leader in working to incorporate the Town.

“Since (the founding) and until his death, he was like Admiral Farragut — always full speed ahead,” former Farragut Vice Mayor Dot LaMarche said.

“The Russell House and land are what it is today because of Ralph’s vision,” Nixon said. “His vision was to save this home in perpetuity, and that has been accomplished today in a great manner.

“I talked to Charlie Russell. He is absolutely elated at the way this looks,” Nixon added. “He’s elated that his family home is restored in the condition it’s in right now; and could there be a better plaza anywhere than the McGill Plaza? And certainly Ralph McGill, its proper to honor him today for his vision for this place.”

“We truly would not be standing here today and seeing the amazing things happening without the vision of Ralph McGill,” Vice Mayor Louise Povlin said.

She recalled becoming involved with the Town “because Mayor McGill invited me in and encouraged me to get involved.” 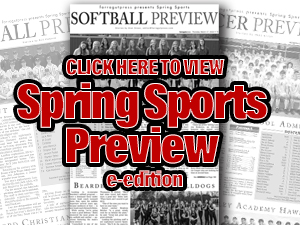