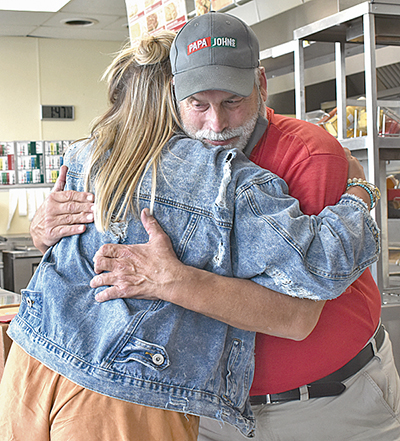 A selfless act by a Papa John’s employee led to an outpouring of love and unexpected monetary blessings Friday, May 7.

Lauren Beck of Concord presented a card, nearly $900 raised by the community and a gift box from Buff City Soap to Bob McGee, a long-time Papa John’s worker who had aired up Beck’s low tire earlier in the week.

McGee was tearful and thankful for the gifts.

“It means a whole lot that people would take the time to let you know you are appreciated,” he said.

“I just wanted to thank him and show him how much it meant to me, for him to have gone out of his way to help me,” Beck said. “He was just so kind.”

Beck had taken her boyfriend, Jonathan King, to the Summit Medical Walk-in Clinic in Century Plaza Sunday, May 2, and while waiting for him in the parking lot, McGee — who had just finished his Papa John’s shift — noticed one of her rear tires “was almost flat,” he said.

“I am notorious for not taking care of my car,” Beck said. “And it had been a crazy day for me. I had coached my (CBFO) softball team, then had to take my boyfriend to the clinic because he was really sick and couldn’t drive himself.

“Bob told me I needed air and suggested I go immediately and get some, but I told him I would go as soon as my boyfriend came out.”

McGee left to run an errand, and realizing he had an air compressor in his own vehicle, he re-appeared within 10 minutes to take care of Beck’s tire.

“I didn’t want anything to happen to her out on the road, or anything,” he said.

“I was just so surprised,” she said. “You don’t see a lot of that going on. Here he had just gotten off work and he was so, so sweet to be worried about me.”

Beyond thanking McGee on the spot, Beck took to social media to post about the experience and said she had found out McGee would be retiring at the end of the month.

After first suggesting that readers make donations during May to contribute toward McGee’s retirement, at the suggestion of Julie Switzer of Thornton Heights, Beck decided to gather donations from the community and surprise McGee with them during his work day.

Melissa Parker made the card, which contained the cash donations, Beck said, and in it Beck wrote, “Thank you for always showing kindness! Love, Your community.”

“You just never know what someone is going through,” Beck said. “Sometimes it is just one simple thing that can make all the difference to someone.”

In addition to sharing news of the selfless gesture, Beck’s post turned into a loving tribute to McGee, who currently lives in Halls but formerly lived in historic Concord.

“I have met him,” commented Robyn Walker of Choto. “He has delivered for me. A wonderful person who I try to tip above and beyond.

“Thank you for sharing.”

Anita Baumiller of Westland Acres stated, “That is such a sweet thing of him to do. I’ll contribute to your gift for Bob.”

“What bright stars of neighbors Lauren and Bob are,” stated Carla Loveday of Lovell Hills after witnessing the presentation.

“It’s so touching to see how everyone used Nextdoor to reach out to love and build up, instead of bickering and tearing down.”

McGee said he has been employed by Papa John’s nearly seven years.

“They have been nice enough to let me work in the store until I retire,” he said. “But if they get really busy, I’m still happy to deliver if they need me to.

“I am very glad I have been in a position to help people, wherever I can,” McGee added. “I’ve had a lot of good customers down thorough the years and it has been my pleasure to serve them.”

“I was not surprised at all to hear what Bob had done,” said McGee’s manager Nick Montgomery. “When I heard about it, I said, ’It sounded like a Bob thing to do.’ He has been a great employee, and he has always had great customer feedback.

“We are really sad to see him go, but he has earned it.”