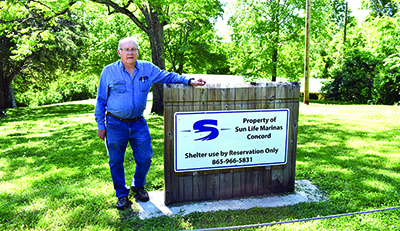 Bill Seaver has personally cared for and enjoyed Concord Park for more than two decades as both a volunteer and an area resident — but imminent plans to expand its marina are causing him grave concern.

The recently retired University of Tennessee statistics professor, who is in the park as much as three times daily, has started an online petition at https://www.ipetitions.com/petition/save-concord-park-for-tennesseans-the-animals to bring awareness to the proposed changes, although ideally he would like the expansion to cease altogether.

“The essence of this petition is preferably to shut down the expansion of the marina,” Seaver shared online. “Or maybe a compromise that would reduce the expansion, keep the quietness, give access to water for the animals and protect their habitat.

“My concern is that there is no compromise that would do this without public input,” he added. “In addition, there was no environmental impact study and no consideration of all of the traffic both on the water and the roads around the park.

“It all seems to have been hidden under the guise of COVID or other things like money.”

Sun Life Marinas operate Concord Marina through a lease agreement with Knox County, which had been deeded the land from TVA.

Knox County Commissioners unanimously approved an amended contract with Sun Life Marinas in August 2020, which outlined expansion plans that include 135 additional boat slips, adding 131 parking spaces and replacing an existing waterfront pavilion, all of which would nearly double the marina.

Although Seaver said it was his understanding the proposed expansion “came before TVA, and TVA denied it because the additional docks and slips would have extended too far out in the water,” Taylor Harris, president of the Old Concord Residents Association, which also opposes the expansion, said she has discovered TVA has not yet approved the move.

“I heard from Deanna Thompson, who is a Recreation Agreements Specialist for TVA and handles the Fort Loudoun Reservoir,” Harris said last week. “She said that they have spoken with Knox County concerning a request for a potential expansion of the marina and they are working with them, but that they haven’t approved or denied the request to date.

“She said there would be a public-comment period should they accept the application,” she added.

Seaver, who is keenly concerned for the wildlife, along with preserving the quiet atmosphere, believes greed is the driving force in the changes.

Seaver also believes the expansion would contribute to negative and criminal behaviors he already has personally witnessed.

“There is not enough (Knox County Sheriff’s Office) presence in the park, but I have reported to them about what I have seen, including underage drinking and drugs,” he said.

“There has also been speeding on the maintenance road and the road around the marina … some of which has resulted in DUIs and dead animals,” Seaver added.

Finally, the quietness of the park, he believes, “is being sold for money. Many people come to the park for a quiet walk, hike, family picnic, etc. The park will be more crowded than the dog park.

“Why should we give up our tranquility and green space for someone’s pocketbook?” Seaver asked.

“We’d like to emphasize our concern about how this proposed expansion would encroach on our historically protected community,” Harris said. “The Village of Concord is Knox County’s only historic district outside Knoxville’s city limits and is protected by an HZ overlay.

“This stretch of lake is central to our community and the proposed expansion would replace mature trees and landscape with green roofs, paved parking lots,and an enormous amount of noise pollution.”

Late last week, farragutpress contacted Knox County Mayor Glenn Jacobs’ office. Mike Donila, director of communications, said, “As of now, all we can really say is that we also reached out to TVA and (expected) to have a meeting with them (earlier this week).”